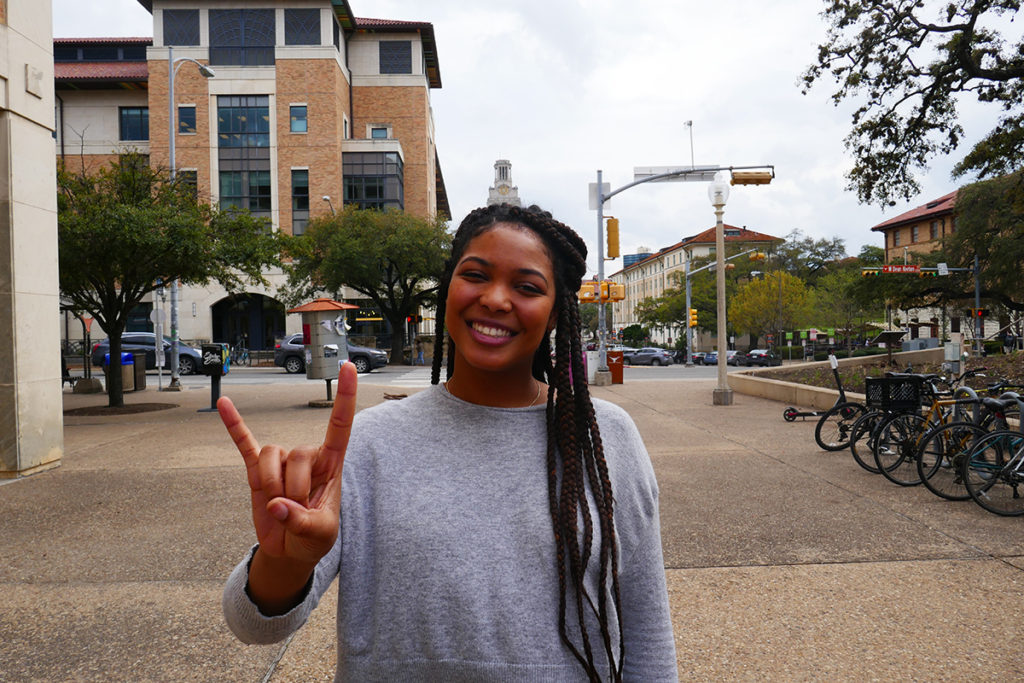 Just before the start of the fall semester, Alexis Allen immersed herself in the Longhorn experience at Camp Texas, a three-day event hosted by the Texas Exes that shows incoming Longhorns what it means to be a UT Austin student. Surrounded by excited soon-to-be Longhorns, Allen found herself feeling less than enthused.

“I didn’t see many people who looked like me and I got the sense that I wasn’t supposed to be there,” says Allen, a Plan II Honors/government senior. “I later had a talk with my mom about transferring and she insisted that I stick it out. Looking back, I’m so glad that I did.”

Coming from a small, predominately white high school in Houston, Texas, Allen was ready for a change. Yet when she arrived on campus, she saw an all too familiar scene.

“Back in high school, I was used to the lack of diversity and accepted that this is just how things are,” Allen says. “In college, I expected to see a lot of different faces only to realize that more work needs to be done.”

Later into the fall semester, Allen found a counselor recruitment ad for Camp Texas and immediately knew what she had to do.

“When I saw that flyer, I knew I had to apply,” Allen says. “If I could make one person feel like they could find their place at UT, that’s what I wanted to do.”

During her time on campus, Allen has participated in several student groups to inspire more of her peers to join as well.

“I remember meeting an African American student at Camp Texas who told me I was the reason why she joined the Texas Orange Jackets,” Allen says. “Now the Orange Jackets is growing in diversity a lot, but when I first joined I didn’t feel like it was necessarily a space for me.”

Allen is also highly involved in several groups that advocate for underrepresented student populations including the Multicultural Engagement Center’s Afrikan American Affairs student agency and Student Government’s Diversity and Inclusion agency. She is especially proud of her efforts in co-founding the Black Honors Student Association, which works to give students a sense of community through discussions about the minority experience. The idea for this new endeavor, she says, was sparked in her Plan II Honors classes.

“I was one of two Black students in Plan II,” Allen says. “Back when I was a freshman, it was an eye-opening experience sitting in a classroom and not seeing any faculty or students who looked like me.”

Allen credits her encouraging professors and staff members— especially Plan II Admission Director Kerry Pasquale—for helping her bring this idea into fruition. She also gives a special nod to her Black Student Alliance adviser, Richard Reddick, who supported her every step of the way. Since the association was launched, the numbers of African American and Latinx students have been slowly but steadily increasing.

“We have recruitment events to be honest and candid with students about diversity issues on campus, and to show them that programs like Plan II really care,” Allen says. “Many of us in the association attend the freshman recruitment event with Plan II every year to talk to new and prospective students about the space we can offer them.”

Since she was in high school, Allen has always been involved in campus advocacy. Now as she prepares to graduate this May, she plans to take her political pursuits to the next level by attending law school and later working in the public policy arena.

“I’m going to take a gap year so I can get some work experience in the area of public policy,” says Allen. “I’m passionate about education policy, so I want to learn more about affirmative action and how it affects the college pipeline.”

Her best advice to new and returning Longhorns is to take advantage of the university’s resources—including the many professors and advisers who go above and beyond to help students succeed.