A Beacon of Hope: First-Gen Longhorn Heads to Yale Law 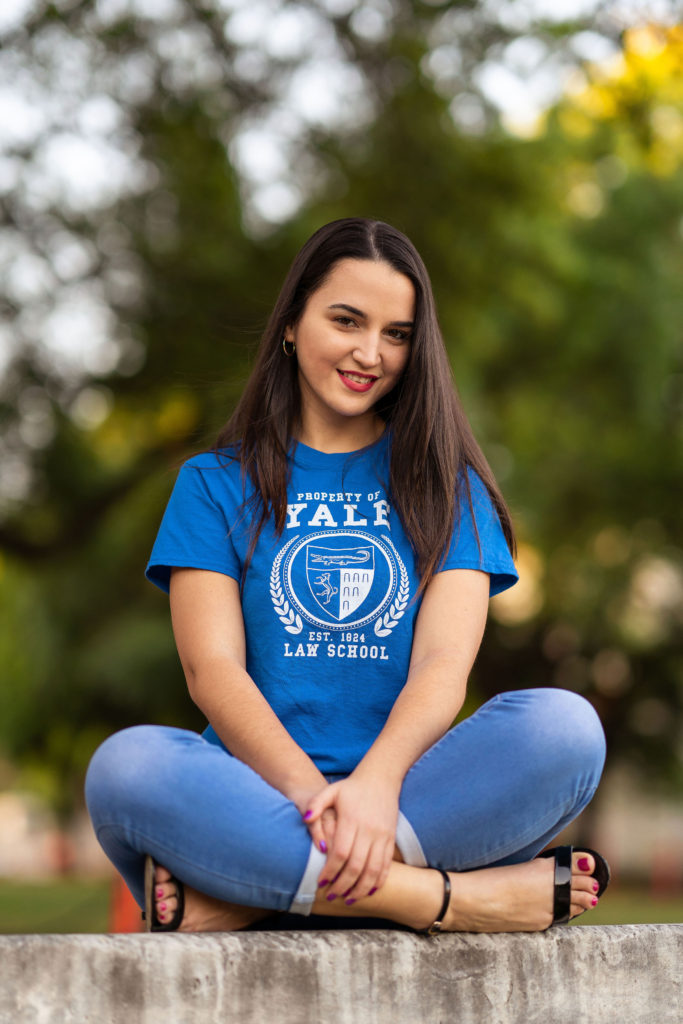 When Evelin Caro Gutierrez came to the United States by way of Havana, Cuba, she didn’t know the English language and had to catch up quickly in her high school English as a second language (ESL) classes. While assimilating into a new culture, she and her family bounced from one home to the next until they settled into a permanent home in Houston, Texas.

Despite the setbacks she faced along the way, Gutierrez put in the work, applied for every scholarship and grant she could find, and got accepted into UT Austin. Upon arrival on the Forty Acres, she set just one goal for herself.

“During my freshman year, my first and only question was, ‘Is it possible to pass college?’” says Gutierrez, who graduated in spring 2019 with degrees in government and philosophy. “I had this idea that college was an unreachable goal, so all I wanted to accomplish was to finish school.”

Now a Yale Law School student, Gutierrez has accomplished more than she could have ever imagined. In addition to getting accepted into the Ivy League, she was recently named a Dean’s Distinguished Graduate, the highest honor awarded to students in the College of Liberal Arts.

“UT has given me so much access to so many things,” says Gutierrez, who served as president of Minority Women Pursuing Law. “Even in my classes, I didn’t feel like I had less of a chance to succeed because of my background.”

In a word, Gutierrez is grateful. She seizes every opportunity that comes her way and has made it her mission to inspire others to do the same.

“Here, we have so many opportunities that so many people would die to have,” Gutierrez says. “I’ve learned to take nothing for granted and to help others as much as I can.”

Early into her undergraduate career, Gutierrez discovered her strengths when she learned how to speak her voice—a freedom that she didn’t have back in her home country.

“At first it was hard for me to challenge other people’s ideas or something we were reading in class,” Gutierrez says. “Growing up, I learned to not question authority, and it’s taken awhile for me to break out of this mentality of just accepting everything I hear as the truth.”

Now Gutierrez is devoted to helping more refugees who have escaped political oppression. As a Rapoport Service Scholar, she interned at several nonprofits, including Sewa International and Refugee Services of Texas. She also spent a semester in Washington, D.C., where she interned at the Organization of American States as an Archer Fellow. Through this work, she grew more passionate about giving back to the refugee community and ultimately making improvements to the U.S. immigration system.

“I want to help people who are victims of social problems and political oppression,” Gutierrez says. “I can see myself doing a range of things to help underserved communities, but I’m not sure where I’ll end up just yet. As long as I’m helping people, I’ll be happy.”

After completing a challenging yet rewarding five weeks of training in the College to Career (C2C) Explore Law program, Gutierrez is ready to become a Yale Bulldog and study at the highest-ranked law school in the nation. She is one of many Explore Law graduates who have been accepted into top-tier law schools. A signature program within the Longhorn Center for Academic Excellence (LCAE), Explore Law offers UT Austin, Austin Community College and Huston-Tillotson University students a wealth of knowledge and resources in a fast-paced summer course. By the time they earn their certificates, students have all the skills they need to pass the LSAT and get into the law school of their choice.

Of all her experiences in the program, Gutierrez is especially grateful for her mentor and instructor Meg Clifford, who motivated her every step of the way.

“I value the people who see things in me that I don’t see myself,” says Gutierrez, who participated in the 2016 cohort. “Meg Clifford helped me see that it really is possible to be a lawyer—and that this profession can be used as an avenue for change.”

Many years from now, Gutierrez will continue to look at the university’s iconic tower as a beacon of hope for future generations of immigrant students.

“I’m really thankful for this university and the resources it has offered me. It has truly changed my life and my family’s life,” Gutierrez says. “I also want to say thank you on behalf of all first-generation students who have benefited from all of these empowering professors and staff members.”