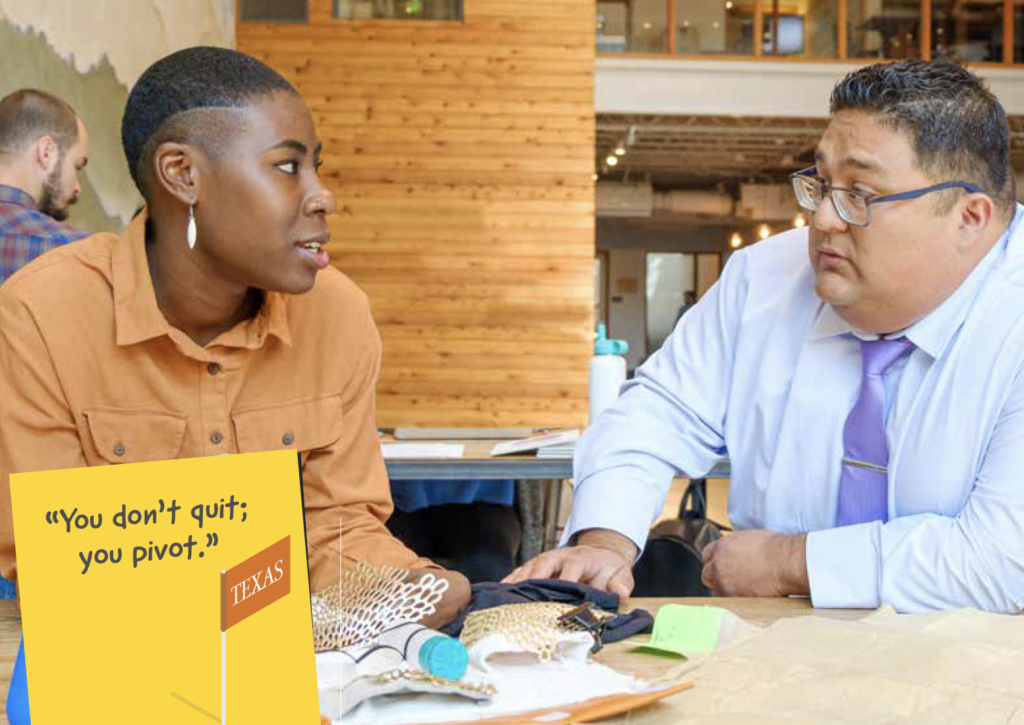 A diverse group of young professionals dressed in their business best stands before a panel of judges to deliver a startup pitch. One team member steps forward and points to a PowerPoint slide that shows the contents of a beauty toolkit designed specifically for African American hair.

The kit, she explains to the judges and the audience behind them, will be the start of a new beauty line called ReMane that promotes confidence and self-love for Black women with natural hair.

“This product is marketable because it’s coming from two Black women who share the same pains and challenges,” says D’azhane Cook, a senior in the McCombs School of Business. “This is something we could use ourselves because we are part of the target market.”

After delivering their pitch, the team members answer a battery of questions from the judges—all of whom are experts in Austin’s robust startup industry. This scene may sound familiar to fans of “Shark Tank,” but it is actually a “Demo Day” presentation for the DDCE’s newly created Product Prodigy Institute.

“We’re teaching product management and entrepreneurial thinking so we can create the next generation of diverse executives,” says Rubén Cantú, executive director of the Office of Inclusive Innovation and Entrepreneurship, which prepares traditionally underserved students for the new world of work.

From the Classroom to the Boardroom

Launched in spring 2019, the course is offered to undergraduates of all disciplines who want to make a positive impact on society through innovation. Unlike other entrepreneurship programs at UT Austin, this class is designed specifically for students—many first generation—who come from diverse backgrounds.

From the very first day, Cantú instills an important lesson: They don’t have to be on the honor roll, come from money, or have family connections to make it big.

“I want to give all students the chance to think of new ways to uplift their families and their communities,” Cantú says. “I tell them, ‘I can’t pull you all up at once, but I can throw the rope down and teach you how to climb so you can show others how to follow suit.’”

Throughout the course, students learn about every aspect of social entrepreneurship, from identifying a need in the community to conducting market research to drafting vision and mission statements. Broken up into four teams, the aspiring moguls must build a watertight business model that addresses a specific social need. Their work begins before they ever step foot into the classroom. The first requirement is to pass a panel interview.

“It was a hard interview,” says Ariel Lee, a studio art/government senior and co-founder of the ReMane haircare line. “I was given this scenario of working in Silicon Valley and having to explain my budget and my marketing strategy to investors. They really made me think on my feet and come up with innovative ways to solve real-world problems.”

Cantú also accepts community members into the course, thereby offering a wealth of university resources and expert knowledge to those who are willing to put in the work.

“It doesn’t matter if you’re a college student or a high school dropout,” Cantú says. “If you’re hungry, I can see it in your eyes. If you have that hustle, I’m going to give you a shot.”

The bar is set high for all students, no matter their academic background or experience. By the end of the fall semester, their products must be fully developed and ready for judging at the second and final “Demo Day” event in December.

“I envision them getting their first dollar by the second semester when they test their products in the market,” Cantú  says. “I want the community to see how we took these students with no experience and turned them into CEOs.”

Despite their inexperience, Cantú sees that many of his students have what it takes—the drive, the determination, the grit—to land themselves on the next Forbes “Ones to Watch” list. What gives them the edge, he says, is their drive to improve communities in ways that have never been done before.

Lee believes she connects with her target consumers on a much deeper level than the average beauty-line executive. She aims to usher in a whole new standard of diversity and inclusivity within the haircare industry.

“We want to innovate in an area that hasn’t been innovated in quite a while,” Lee says. “This is a human-centered design made by Black women for Black women. We want to be confident, to feel professional, to feel beautiful—and all of that is coded in our hair.” 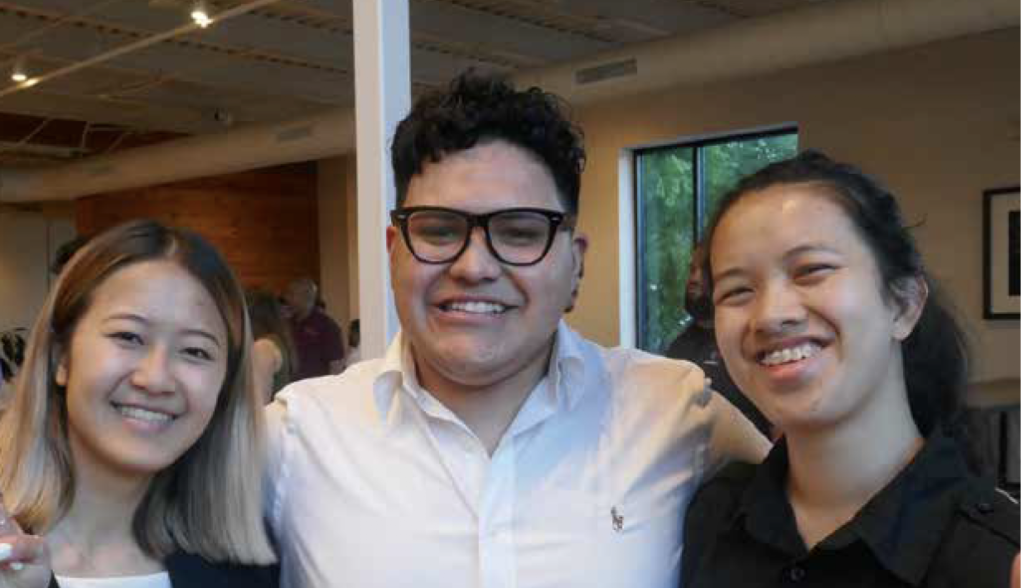 Sally Doan, a recent College of Natural Sciences graduate, also poured her lived experiences into her new venture. While delivering her startup pitch, she spoke briefly about her father, a former small-business owner from Vietnam who now struggles to make ends meet as a low-paid utilities worker.

“Seeing him sacrifice years of his life to work as an electrician—even though he always wanted to be a businessman—made me very passionate about helping immigrants who, like my dad, have a dream to make a better life for themselves,” says Doan, who earned a degree in mathematics in spring 2019.

As the co-founder of Emi-grant, Doan and her team aim to connect immigrants with the resources they need to start their own businesses in the United States. The app-based platform will provide connections with professionals within their communities, from accountants to lawyers to small-business owners.

Doan’s team member Rane Prak, a humanities honors junior, knows from experience how valuable this service can be for those who are navigating legal issues while assimilating into a new country.

“My mom was deported when I was 13, so I relied heavily on people in the community to take care of my aunt and me,” Prak says. “Now that I have overcome those hard times, I want to give back and serve others who are facing the same struggles.”

The students’ stories are unique and varied, but themes of sacrifice, determination and survival are common to most. Cantú, the son of an immigrant father from Mexico, can certainly relate. Growing up, he watched his father—a talented culinary innovator—work a thankless custodial job for decades to pay the bills.

“He made the most amazing salsas and could have patented so many products, but he didn’t have the resources, support and education to pursue a career in business,” Cantú says. “I refused to let this happen to me and learned to train my mind so I wouldn’t give up when things didn’t go my way.”

Like Cantú, Vi Nguyen refused to give up her entrepreneurial pursuits and overcame a number of obstacles while starting up her new business Homads, an online personal relocation specialist that streamlines the moving process for busy people. 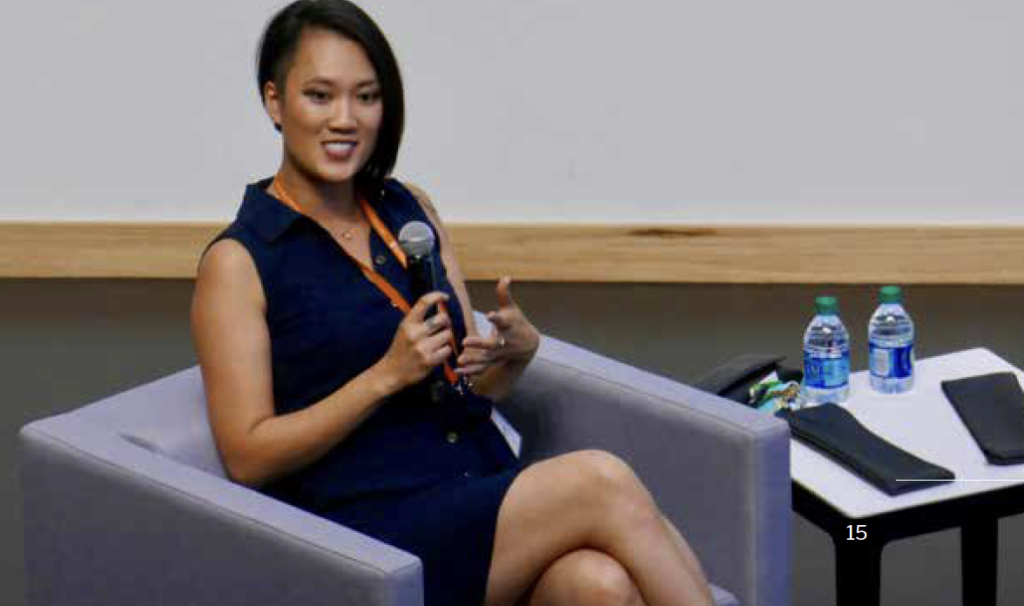 Her journey to becoming a CEO wasn’t an easy one, but she forged onward, finding creative solutions to keep her business alive. She credits much of her success to her experiences growing up in a Vietnamese-American immigrant family.

“Early into my career an adviser told me, ‘You don’t quit; you pivot. If you fail, if you run out of money, there is still a way to make it work,’” says Nguyen, who launched her business in 2016 with her co-founder Lan Chu. “There were moments when our company should have died, but we found a way to keep it afloat. I believe my low-income upbringing prepared me to be a better entrepreneur.”

Perhaps her biggest setback was securing funding from investors—a daunting task for a rookie entrepreneur. Factor in her race and gender and the challenges were three-fold.

“Early on, there’s a lot of failure, so investors are more likely to go with someone who’s established,” Nguyen says. “Then I have two additional strikes against me: I’m female and a minority.”

Although diversity trends are slowly on the uptick, statistics show women and minorities have long been woefully underrepresented in the land of startups. According to a report by Pitchbook, of the $40-plus billion of funds raised by the predominately white venture capital firms, less than 3% was allocated to Black- and minority-owned startups. Even more alarming, this percentage decreases if startup founders fall into more than one minority group.

Meeta Kothare takes these statistics into account while conducting her research at the McCombs School of Business’ Social Innovation Initiative, where she serves as managing director.

“Historically, women minorities have difficultly accessing capital—that’s the biggest barrier,” says Kothare, who teaches Social Entrepreneurship and Impact Investing courses at McCombs School of Business. “A lot of people are trying to change that with career accelerators, but this is still a huge systematic barrier.”

Until more minorities and women enter the venture capital industry, the startup sector will continue to have a diversity problem, Kothare notes. According to a report by the National Venture Capital Association, 89% of partners at venture capital firms are men, the vast majority of whom are white.

“When you don’t have that racial and social economic diversity in the funding system, minority entrepreneurs are less likely to be funded,” Kothare says. “It’s a double whammy.”

Despite the funding pitfalls, Nguyen advises all fledgling entrepreneurs to find creative solutions and keep the momentum going. With a trusted, dedicated team and a solid mission, she says, everything else will fall into place.

“Don’t focus all your efforts on chasing the money,”Nguyen says. “Just keep showing up and making sure your business survives. Trust that you can get money, trust your market, and trust your users.”

While serving as a judge at Product Prodigy’s “Demo Day” event, Nguyen played the role of investor, asking some tough questions and offering critiques. Although it can be hard putting students on the spot, she knows from experience that much can be gained from a little tough love.

“If I didn’t listen to criticism, I wouldn’t have learned more about my market and my users,” Nguyen says. “It’s the investor’s job to say no; they’ll poke holes in your product, and then you have to figure out how to solve them.”

As they navigate the ups and downs of their entrepreneurial journeys, students will learn about the inevitability of failure. And though failure is often seen as a stepping stone to success, Kothare advises students to exercise caution before setting the wheels in motion.

As social entrepreneurs, Cantú’s students learn to focus on one main objective: the total well-being of the people they seek to serve. Rather than providing unwanted or unnecessary services or, worse, crowding out mom-and-pop businesses with big-box stores, he wants his students to provide a good public service while maintaining a healthy bottom line.

“Businesses can turn into invasive species that destroy all the local businesses,” Cantú says. “To a degree they have to be competitive, but at what cost? I show my students that we are doing this to create communities, not destroy them—because when they do better, we all do better.”