The Long Way Home: For Octavio Martinez, all roads to mental health equity led back to Texas 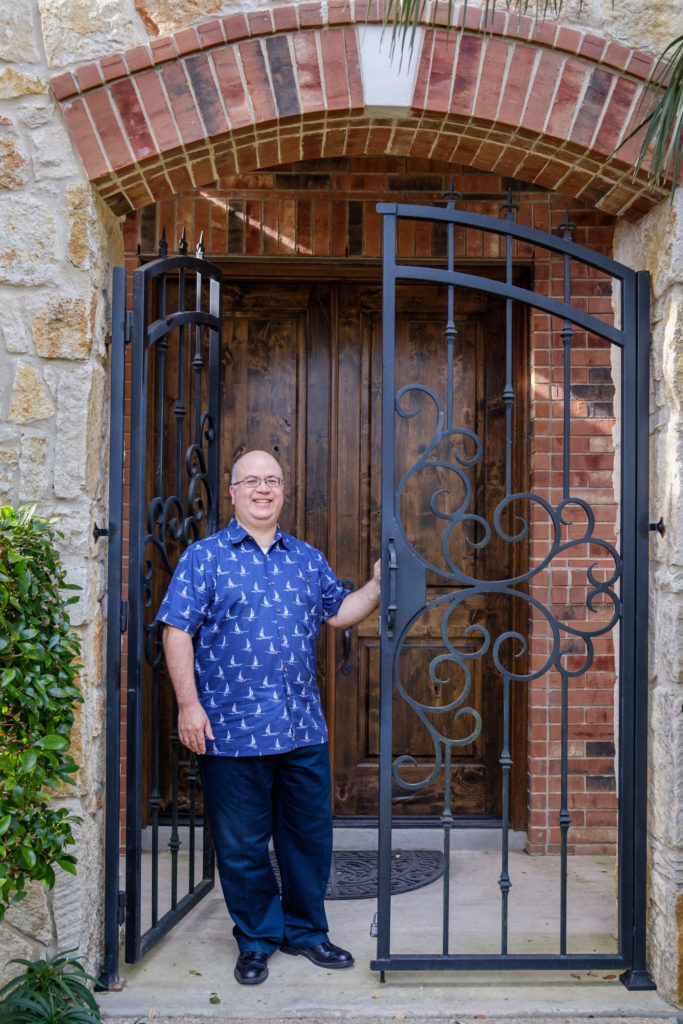 Growing up in a large military family, Dr. Octavio Martinez and his four younger brothers didn’t settle in one town for very long. But there was one place that always felt like home: their grandmother’s rural East Austin farmhouse.

“I remember those summer days playing football out in the open, surrounded by pecan trees, strawberry patches and bee hives—we even had an outhouse,” says Martinez, executive director of the Hogg Foundation for Mental Health.

On the weekends, Martinez spent most of his daylight hours curled up with a good book at the Oak Springs Public Library, imagining himself accomplishing heroic feats in far and distant lands.

“I traveled the world through books,” Martinez says. “I read so many amazing stories, from autobiographies to classics like ‘Gulliver’s Travels.’ I just loved how they played out like a movie in my head.”

While riding on the city bus with his grandmother, he was transfixed by the looming UT Tower, a formidable presence during a time when the Friday night lights reigned supreme in a much quieter Austin.

“Since I was in the first grade, I always knew I would be going to college,” says Martinez, who achieved his dream of becoming a Longhorn and was the first in his family to earn a college degree. “I didn’t ever imagine becoming an academic, but I did realize there was a big world out there and that I wanted to make a difference.”

With full support from his parents, Martinez took a page from his beloved adventure books and traversed a long, meandering educational path—from UT Austin (and back again) to Baylor College of Medicine to Harvard University. And like the protagonists in those stories, he was willing to risk it all—a comfortable life and sizable salary—to pursue the greater good.

The first chapter of his quest began at UT Austin, where he followed his father’s footsteps and enrolled in the Air Force ROTC program. His curious nature soon led him down the road of the humanities, where he discovered an interest in mankind.

“I wanted to focus on the liberal arts because I enjoyed reading and learning so much,” Martinez says. “Regardless of your profession, having empathy and an understanding of humanity ensures fairness and equitable treatment of others.”

After exploring several avenues of study—from military science to pre-law to pre-med—Martinez set his sights on the fascinating world of finance.

“I enjoyed learning about finance and banking because at the time it was about building and creating,” Martinez says. “A trajectory in banking allowed me to do that—to help people improve their lives.”

Martinez earned his bachelor’s and master’s degrees from UT’s business administration program in 1983 and 1987, respectively,andquicklyhithisstrideduringtheboominggo- go ‘80s economy. Early in his career, he landed himself a corner office in one of the tallest buildings, at the time, in Austin.

It was all going very well until the big savings and loan crisis of the late 1980s and early 1990s.

“First Republic Bank of Texas was the largest bank failure at that time,” Martinez says. “When the real estate balloon popped, unethical things were going on with property values. After the big bank mergers, my portfolio shrunk by $40 million and I had to ask myself, ‘Is this the kind of banking I enjoy?’ The answer was no.”

Although Martinez had the option of continuing a lucrative, albeit unfulfilling, career in banking, he wasn’t convinced the road he’d traveled was the best route.

“I was ready for an impactful career change—something that would allow me to continue my work ethically and with integrity,” he says. “Even if this crisis hadn’t happened, I would have come to this crossroads eventually.”

Rather than staying the course, Martinez stunned his friends and colleagues when he announced he was returning to UT Austin to start all over again.

“Sure, I was financially comfortable with a nice sports car and a big condo on Barton Skyway, but there was a psychological disconnect,” Martinez says. “I decided that medicine fit the bill, which meant going back to UT during my peak earning years.”

To test the waters, Martinez juggled a volunteer shift at a local hospital while continuing his full-time job at the bank.

“I just needed to be sure I wanted to be a doctor, so I immersed myself in the field and found it to be intriguing, intellectually stimulating and challenging—pretty much everything I was looking for,” he says.

In less than a year, Martinez finished all his prerequisites and found himself at another crossroads.

“I was accepted into every medical school I applied to,” he says. “It was a tough decision, but Baylor College of Medicine won out, and I don’t regret it one bit. I couldn’t pass up the opportunity to train at the largest medical center in the world.”

During his various clinical rotations, Martinez explored a multitude of avenues he could take in the field of medicine— including neurology, cardiology and psychiatry—leading him to yet another quandary.

“I first envisioned myself working in family medicine, but during medical school, I learned about so many fascinating specialties and subspecialties,” he says. “Every time I did a specialized rotation, I found a new interest, making it difficult to decide which residency I wanted to do.”

Standing at the all-too-familiar fork in the road, Martinez weighed his options and decided to head east to study psychiatry at Harvard Medical School, a decision that would eventually lead him to his life’s work: mental health advocacy and intervention.

“The more I looked into psychiatry, the more it appealed to me,”Martinezsays.“There’sstillsomuchwe’relearningabout the brain and the central nervous system, and it has been amazing to see how it’s all connected.”

Martinez’s direction in life became clear when he started a clinical rotation with patients at Bridgewater State Hospital, a state facility in Massachusetts for the criminally insane.

“Working at the forensic unit was such a fascinating and unique experience,” Martinez says. “It really piqued my curiosity about the brain and how different systems manifest themselves in the human mind.”

“I found I really enjoyed working at the clinical level with populations of people of color who were faced with health disparity issues,” Martinez says. “The more I explored it, the more I realized I was attracted to both the clinical and the policy work. With policy intervention, I could make a difference that would, in turn, impact thousands of people.”

When the Great Recession decimated state mental health budgets in 2008, a beloved colleague and mentor came calling with an offer Martinez couldn’t refuse. Dr. King Davis, the fourth director of the Hogg Foundation, recognized Martinez’s talents and encouraged him to be his successor.

“He was ready to step down and wanted me to throw my hat into the ring during the national search,” Martinez says. “I told him, ‘I know nothing of philanthropy—I’m an academic and run clinics.’ But after talking with my wife, I decided to give it a go because when an opportunity presents itself, I’d rather try and fail than have any regrets.”

Now well into his 11th year at the Hogg Foundation, Martinez has found his calling by advancing Ima Hogg’s vision to “provide a mental health system for the people of Texas.” Established in 1940, the foundation works to remove barriers and bridge systemic gaps in mental health through a number of initiatives.

“All that we do—the policy work, community services, education and mental health advocacy—has kept me intrigued all these years,” Martinez says. “This is the one position that has allowed me to use all my skill sets at the same time.”

And during the current global pandemic, he says, we are getting a long overdue wake-up call about the need for this work.

“We’ve been filling the health care gap long before the pandemic,” Martinez says. “Now the greater population has a better understanding of the gaps in our health care system, especially in public health and the mental health arena.”

Long after people can safely put away their masks and resume life as they knew it, Martinez says the Hogg Foundation will be getting ahead of the next public health crisis before it hits the national news.

“Before COVID, we worked very hard to improve mental health services in Texas during public health crises,” Martinez says. “We’ve been dealing with manmade and natural disasters for a long time, and we will continue to do this work and partner with our colleagues, nonprofits and state partners to ensure that our historically excluded populations are not forgotten during any point in time and that they get the care they deserve.”

In recent years, the foundation has focused its efforts on improving mental health interventions and outcomes within rural communities across Texas. By going straight to the areas that need help the most, Martinez believes the foundation can substantially fill the widening gaps in our mental health system.

“As a child, I always thought things needed to be fair and that I should be given the opportunity to do my best,” Martinez says. “As I grew older, I realized that everybody should have that same experience. That’s not equality because we don’t always start at the same spot, but we can work toward equity, which, to me, really encapsulates the concept of fairness.”