Meet Ali and Nahid Khataw, proud supporters of the DDCE’s Global Leadership and Social Impact (GLSI) program who have a passion for travel and community service. This year, they generously established an endowment that provides underrepresented students with annual scholarships to participate in life-altering GLSI trips to various destinations around the world—from China to South Africa to the United Arab Emirates.

We caught up with the Khataws to learn more about their journey from Pakistan to Austin, their rise to success, and how they are carrying on the legacy of their benefactors by dedicating their lives to giving back.

Shortly after earning his B.S. in engineering at UT Austin in 1984, Ali was determined to make a good life for himself and his family in Texas. His plans were soon derailed when he found himself searching for work in a bleak job market with minimal prospects. “I was going door-to-door asking for interviews. Finally, I just broke down in tears and begged the front desk associate for an interview. Unable to turn me away, she introduced me to the vice president, and I later got the job. I will always be grateful for her help in getting me that interview,” Ali says.

Back to the Drawing Board

After landing a job-based in Dallas, Ali soon faced another hurdle. His student Visa was about to expire. During this time, his boss hired an attorney to start the three-year process of getting legal status, leaving him with no choice but to return to Pakistan to wait it out. “When I went back to work at my dad’s company in the construction division, I was very depressed because I didn’t want to be in that industry. I wanted to do contracting work. This was a very difficult time, and it took a toll on us both,” Ali says.

With an expired student Visa, Ali and his wife Nahid had no other option but to press pause on the American Dream. That is, until a phone call changed everything. “God works in mysterious ways,” Ali says. “I got a call from the president of D&W Enterprise, who said they had an assisted living project waiting for me in Dallas. We moved to Austin right away!”

The Khataws embarked on their new life in Austin in 1989, right at the brink of the recession. A casualty of the economic downturn, D&W Enterprise started downsizing and later closed its doors for good, leaving Ali at another crossroads. Determined to keep up the momentum in his new career, Ali harnessed his resources and launched his own business. Looking back, he and his wife smile when they recall their humble beginnings with very little money and a lot of egg dinners. “We had bad days where we were just eating eggs for days and were barely scraping by,” Ali says. “But my parents used all their savings to fund my education at UT, so there was no going back. It was all about moving forward.”

Living a Life of Gratitude

As president and founder of Encotech Engineering Consultants, Ali lives comfortably with his entire immediate family in a West Austin homestead. When reflecting on his journey to success, he often thinks of his former employer who set him up in his career. “I will always be grateful for Grady Wooldridge, who has since passed,” Ali says. “Beginning in 2024, our company will honor his memory by giving out ‘Grady Wooldridge Pay it Forward Awards every year.”

Conserving the Wilds of Africa

The Khataws also pay it forward by supporting wildlife and environmental conservation via photo-philanthropy. For many years, they have led photo safaris in Africa, where they teach others how to capture beautiful images of wildlife and landscapes. A renowned, widely published photographer, Ali donates all proceeds of his sales to conservation-focused nonprofits and NGOs in Africa and other regions of the world.

The Power of World Travel

Among their many philanthropic pursuits, the Khataws support the DDCE’s GLSI program because they know firsthand that the greatest way to make an impact on a young person’s life is to send them abroad. “When you travel, you connect with people and start to have respect for other cultures,” Ali says. “If you don’t travel and get exposed to different cultures, it’s easy to start judging every other country and culture(s) according to your own standards, thinking that everyone must be like us.”

Memories to Last a Lifetime

While attending the GLSI’s recent Study Abroad Showcase, the Khataws listened to students sharing stories and photographs from their journeys abroad. “It really struck me when all of the students shared how their lives completely changed after studying abroad—and that they would remember this experience for the rest of their lives,” Nahid says.

Giving the Gift that Keeps on Giving

Ali and Nahid hope to see many more students returning from transformative trips abroad with new perspectives and confidence to pursue their passions. With a lot of grit, determination and ingenuity, the Khataws are living proof that dreams can be achieved no matter what roadblocks stand in the way.

More About Ali and Nahid Khataw 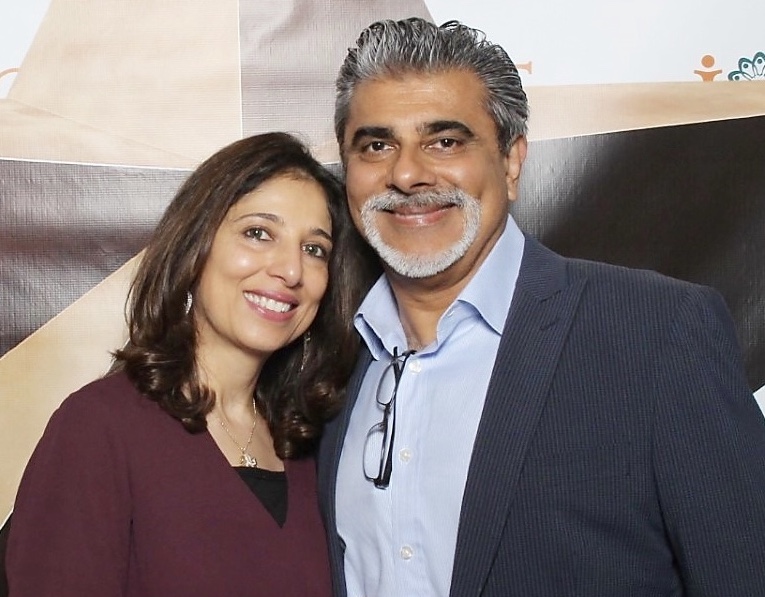 Ali is a UT alum (B.S. Engineering, ’84) and President and CEO of Encotech Engineering Consultants. Among his many accolades, he was inducted into Cockrell School of Engineering Academy of Distinguished Alumni in 2019 and received the Engineer of the Year Award by the Texas Society of Professional Engineers, Travis Chapter, in 2016. He currently serves on the DDCE Advisory Board and is the incoming chair of the Board of the Austin Chambers of Commerce.

Nahid served as founder and President of Accurate CAD & Technical Services, Inc. A passionate advocate for interfaith dialogue, she is the former president of iACT, the Interfaith Action of Central Texas. Currently, she is a member of several leadership boards for Austin-area community organizations, including the Red Cross of Central Texas (where she serves as chairperson) and the Ronald McDonald House. “She is a servant leader, who does everything from the heart,” Ali says.