“I think of LCAE as a second family, they’ve always been there for me.” 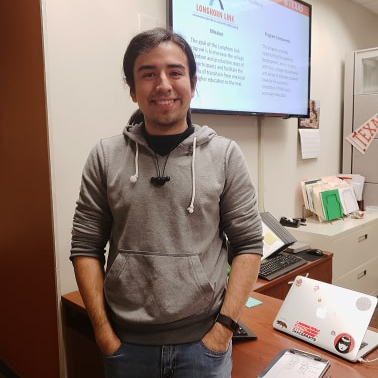 Back in the summer of 2014, I was enrolled in Summer Bridge, it was a summer program that LCAE offered for underrepresented students. I have been working at LCAE for about 4 years now. I think LCAE has helped me a lot, I think of LCAE as a second family, they’ve always been there for me, giving me advice and all those things that I had questions about, they also feed me. I think they taught me how to navigate through the University because I don’t think we have a lot of resources of knowing where to go, who to talk to, and the LCAE staff has been good at directing you to those resources, resumes, cover letters, applications, and improving my writing skills, etc. I think one of the regrets I’ve had in college was not applying for the major AET (Arts, Entertainment & Technology). Initially I was thinking maybe if it wasn’t for me. Instead I wanted chose to take the path of an engineer, I took a lot of core classes: chemistry, calculus, and physics in my first semester and that took a toll on my GPA so I wasn’t able to apply for engineering in the end. I always wanted to do something with STEM and become a computer engineer, well, that’s at least what I thought, that’s why I kept going for that, instead of AET. Then I tried to get in the chemistry program, I found out the labs weren’t for me, I became anxious and felt uncomfortable. While I was taking the chemistry classes I happened to take Italian, which I really liked, I liked the sound of the language. I fell in love with all of the culture, the food and the literature, and after finally attempting to pursue AET I was denied. I already had a lot of credits towards Italian so I decided to major in Italian. I took a 2D animation class in AET and I felt like it gave me a lot of freedom to express myself as a person so I’m currently trying to minor in it. I think that the struggles and conflicts I’ve gone through in career making decisions gave me a path to realize more of my passion in understanding what I like and what I’m comfortable with towards the creative side of things.