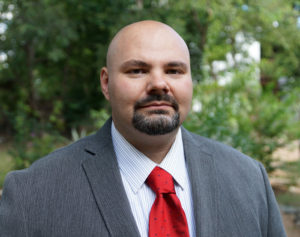 Dr. Eric Dieter is Executive Director in the Longhorn Center for Academic Excellence. He directs the College-to-Career (C2C) Initiatives and the Gateway Scholars, and co-directs the McNair Scholars. C2C programs include Explore Law, a partnership with Huston-Tillotson and Austin Community College, and Explore Business, a partnership with the University Co-op. He coordinates with partners across campus–including the University Writing Center and University Libraries–to offer their support services in LCAE’s space. He is part of the LCAE’s assessment team, and the DDCE’s PreK-to-PhD Educational Pathways committee.

Previously, he was Executive Director of Dual Enrollment Initiatives in the Longhorn Center for School Partnerships. Before that he was Program Coordinator and Curriculum Developer for the Students Partnering for Undergraduate Rhetoric Success (SPURS) dual enrollment program.

In addition to his experience with higher education administration, institutional assessment, and co-curricular academic student support, his research is interested in how people talk about their character in a variety of public spheres, popular, political, and pedagogical. His dissertation, Enduring Character: The Problem with Authenticity and the Persistence of Ethos looked at the tangled relationship between authenticity and ethos, or what is taken as the distinction between intrinsic and constructed character.

He is a first-generation college student, and supports current first-generation students. He has lived in Austin since 2001. He can be reached via email <ericdieter@austin.utexas.edu>, LinkedIn <linkedin.com/in/ericdieter>, and Twitter <@ericdieter>.