On Friday morning, January 27th, the NAACP-Austin branch office was the setting for an eye-opening conversation between a diverse crowd of community organizers, longtime residents, graduate students, police officers, and educators. Garrett Groves, Director of Economic Opportunity at the Center for Public Policy Priorities, walked the group through his recent report,  “The Shrinking Middle Class and Economic Mobility”, which details what many know to be true about the growing economic inequalities facing some residents based on race and education level in Austin and Texas at large. 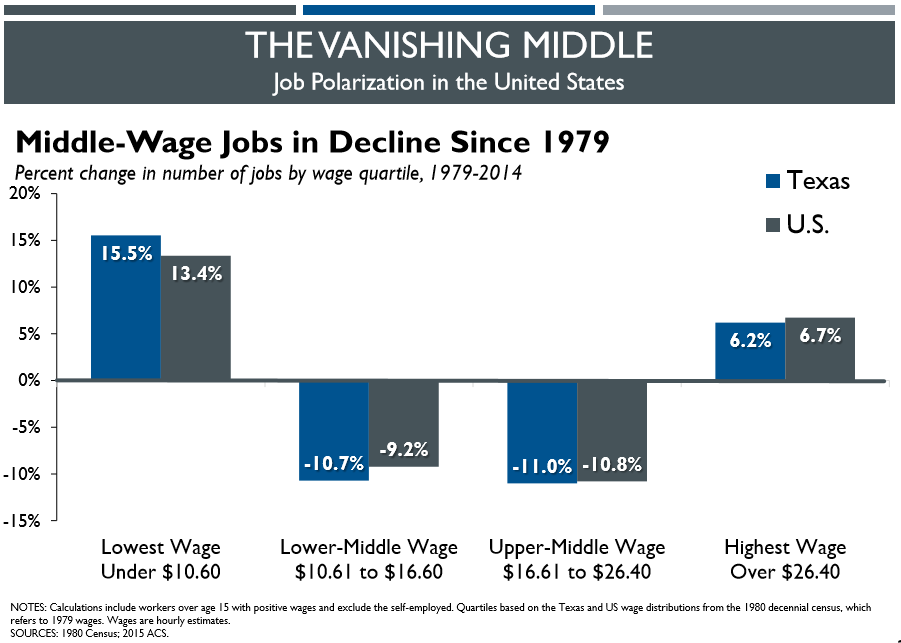 Groves highlighted the urgency of responding to a shrinking middle class by encouraging support for policies that invest in local, career pathways (through partnerships between AISD, ACC, the Austin Chamber, and the workforce). Although the middle class has been shrinking for some time, data has been misused in the past by Texas officials to convince the public of a stable economy with equal opportunities for all. He explained the standard report says that the number of jobs in Texas has grown consistently through the years. While this is true, Groves invited the room to take a closer look at those numbers.

Most reports showing job growth begin at 1979, nearly four decades ago, when the Texas population and job demand were significantly smaller. Growth in the number of jobs as population increases suggests a healthy economy, but Groves made an important distinction. Despite the overall job growth over four decades in Texas, the number of middle wage jobs has decreased by 22%.

As voiced by many in the room, this statistic is the all too familiar reality for community members who experience the difficulty of navigating a local economy with too few middle wage jobs and insufficient education for high wage jobs. Meanwhile, the number of low wage jobs has increased by 21%. Groves’ analysis of the shrinking middle class as a result of middle wage job scarcity reveals a cause of gentrification in Austin. As well-paying jobs are hard to come by, working a low wage job in a city growing ever-more expensive makes the matter of moving not a question of “if” but “when”.

The Community Engagement Center is focusing its efforts to support the Austin community by addressing gentrification and affordability through research, like Dr. Eric Tang’s, and continuing to contribute to weekly Building Bridges conversations to raise awareness and prompt action among stakeholders. Join us as we work toward solutions and be ready to share your experience at our next Front Porch Gathering. The Impact of Gentrification on Longstanding Residents of Austin’s Eastside will take place on Tuesday, February 28th at 6:30pm in the Lovinggood Auditorium of Huston-Tillotson University (900 Chicon Street).