This week’s Building Bridges conversation explored a topic whose that is at the forefront of political debate both locally and nationally–immigration. Shubhada Saxena, Board President of SAIVA (South Asian’s International Volunteer Association), chronicled the history of a nation founded by immigrants which now suppresses the citizenship of people of color and those born abroad. 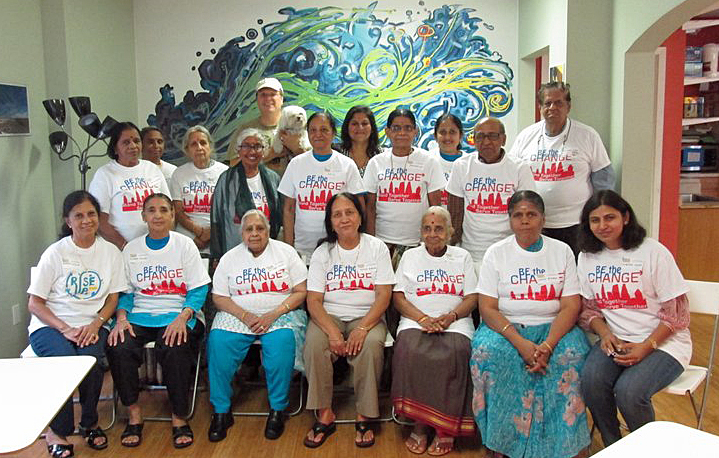 Saxena works to connect the often-neglected, elderly South Asian population with volunteer activities as well as technology and health care education so those older adults can engage in and actively support the communities in which they live. The South Asian label covers a swath of countries (i.e. Bangladesh, India, Nepal, Pakistan, Tibet, etc.) and along with it a diverse web of cultures and languages. Without accessible means of integration like those afforded to working and school-aged immigrants, Saxena shared that the elderly experience barriers in the form of language and culture–barriers she is determined to remove.

As a first-generation immigrant herself, Saxena compared her experience of migration from India with the current challenges newcomers face while integrating into American communities. Despite the politically-charged nature of the subject, in light of the President’s ban on migrants from eight countries and the local debate between Austin Sheriff Hernandez and Governor Abbott, Saxena’s story made the conversation accessible. Instead of dwelling on the issues that divide, she encouraged conversations between people of various races and national origin to cultivate understanding.

For some in attendance, Ms. Saxena’s transparency made the face and voice of immigration personal for the first time. While she revealed common struggles immigrants face, she also made the distinction that the positive experiences of few cannot be generalized to all, and vice versa. Saxena challenged community members to recall stereotypes of South Asian immigrants–as engineers, mathematicians, gas station owners, taxi cab drivers, etc.–and imagine the diversity of experiences newcomers face. In closing, she pointed at the necessity of using empathy to understand varying motivations behind migration that affect immigrants individually as they integrate into Austin.

After reminding the room of everyone’s ancestral origins as immigrants, Saxena called on the community members to welcome newcomers into the community instead of othering. Shubhada Saxena, a Leadership Austin graduate, brought First Friday to a close by sharing a few relevant lessons from the Aspen Institute’s 10 Lessons for Taking Leadership for Racial Equity that Austinites can apply every day in their communities.