Your Community, Your Stories: Cultural Place-keeping in the Age of Growth and Gentrification
Recap |April 2019 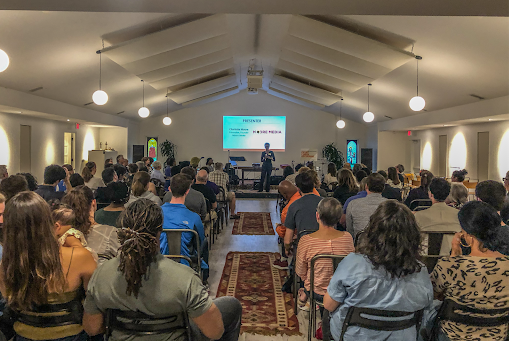 The event was held at VESPER, (located in the historically relevant community off East 14th and Airport and formally the Ethiopian Church) and food was provided by Niella Catering. Guests in attendance included community residents of the surrounding neighborhoods in Central East Austin, students from the University of Texas at Austin, local artists, educators, church leaders, and community stakeholders. 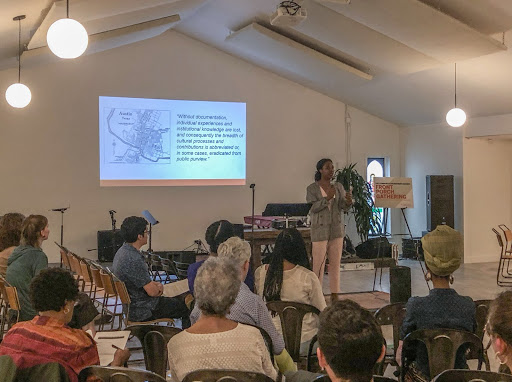 The event opened with a message from Virginia Cumberbatch, Director of Community Advocacy and Social Equity at UT’s Center for Community Engagement, on the importance of documenting the history and culture of underrepresented groups in Austin. To emphasize this point, Cumberbatch cited an excerpt from the book she co-authored As We Saw It: The Story of Integration at The University of Texas at Austin: “Without documentation, individual experiences and institutional knowledge are lost, and consequently the breadth of cultural processes and contributions is abbreviated or, in some cases, eradicated from public purview.” Cumberbatch’s op-ed, “A City of Self-proclaimed Liberalism, on the Brink of Cultural Erasure”, was published in the Austin Statesman earlier that morning.

Before the presentations began, Cumberbatch invited attendees to tell their story in connection to Austin’s cultural landscape on camera. Throughout the evening guests were able to visit the storytelling booth to share their experiences around issues of cultural displacement and historical preservation. 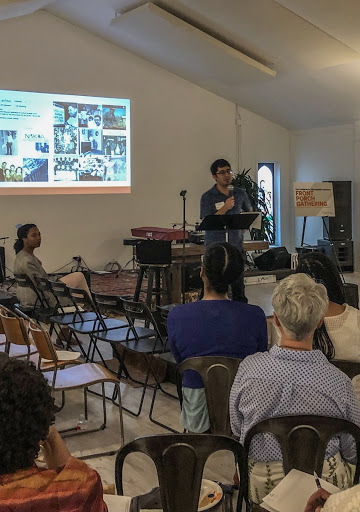 Afterward, the audience listened to a community testimony from  Alan Garcia, the founder of ATX Barrio Archive, an Instagram page dedicated to documenting, celebrating, and preserving the cultural heritage of POC barrios and neighborhoods in Austin, past and present. Mr. Garcia shared images from his Instagram account, which is a historical catalog of his family and the Black and Latinx community in Austin.

A self-proclaimed history nerd, Mr. Garcia would go to the library and tour historical landmarks to learn more about Texas’ history and his family’s immigration story.  Oftentimes, he only found stories that reflected the immigration history of European immigrants, and asked “Where is the Black and Brown history in Austin? Where are those books?” He noted how difficult it is to find these resources. While the city of Austin is focusing on revitalization, Mr. Garcia aims to preserve its history. For that reason, he is committed to using his platform to tell the untold stories of communities of color and the contributions they have made in this city. 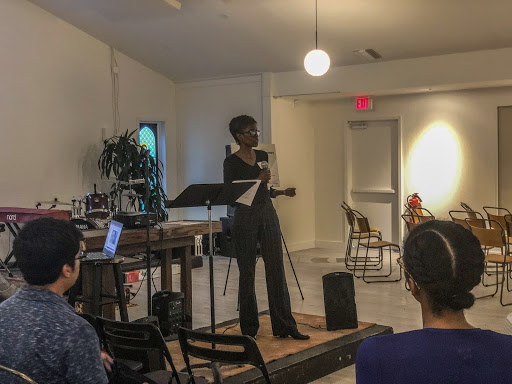 The second storyteller of the evening was. Charlotte Moore, filmmaker and founder of Moore Media, a multimedia company that aims to give voice to individuals, groups, and organizations doing necessary work to raise awareness in the areas of social justice, race relations, and poverty.  Moore discussed the different issues Black people, especially Black women, experience in Austin and in the United States altogether. She talked about how black skin is perceived in society and why Black voices need to be heard. “It’s about awareness. Black people have been invisible for far too long.” 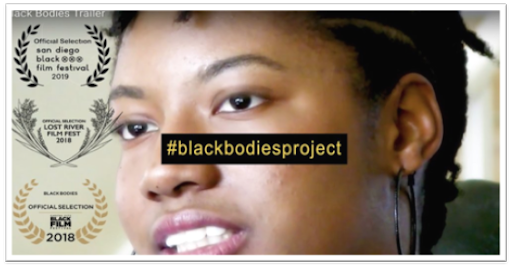 Ms. Moore concluded with a clip from her documentary “The Black Bodies Project”, a film that explores what it means to be black in this world and what goes on in the minds, lives, and bodies of the typical Black person. The film will screen in Austin on May 19th at 1 pm in the Alamo Drafthouse on Mueller. 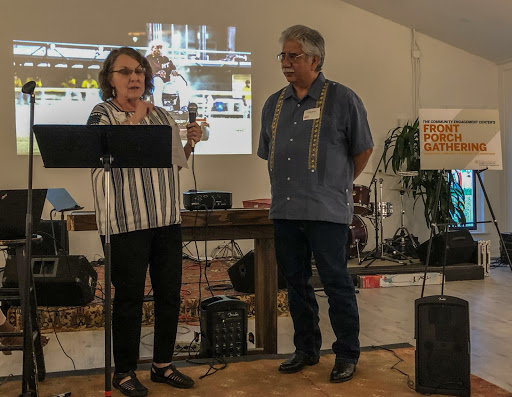 The final presentation of the evening was by Dr. Jane Rivera and Gilbert Rivera, community activists and co-authors of Austin’s Rosewood Neighborhood. Dr. and Mr. Rivera spoke about how they met at a protest in Austin nearly 40 years ago and the role activism has played in their relationship and in their lives. Their book is about a historically African American neighborhood on the east side of Austin, Texas. Dr. and Mr. Rivera shared images from their pictorial book, which tells the story of the evolution of one of the city’s oldest black enclaves, from the late 1870s to present day. The authors highlighted the strength and perseverance of the Rosewood community throughout its history and expressed the importance of preserving these stories as the neighborhood experiences a wave of gentrification. 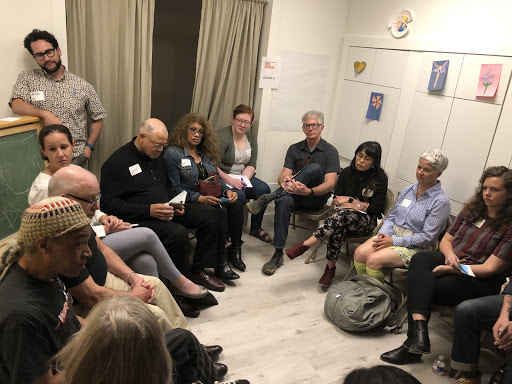 After the final presentation,  the assembled community dispersed into four small groups to discuss their individual experiences living in Austin and brainstorm various ways communities can foster the preservation of cultural and historical landmarks throughout the city and city leadership both prioritize and invest in this work. Each group was facilitated by one of the following  community leaders:

Some of the key themes discussed in each group are as follows:

To review the comprehensive notes from each group’s discussion please click here.

The Front Porch Gathering ended with closing remarks from Virginia Cumberbatch, encouraging the community to continue the conversation and to engage with the Center to work collaboratively on preserving the history and cultural contributions of communities of color, announcing the launch of the Center’s Cultural Preservation project within the Community Housing Hub. 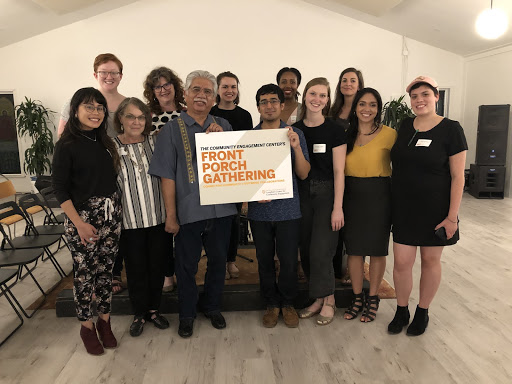