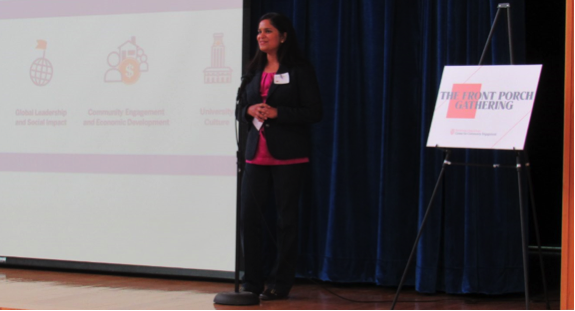 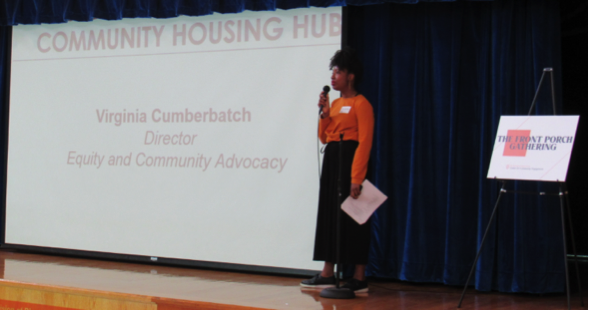 Afterwards, Virginia Cumberbatch, Director of Equity and Community Advocacy at UT’s Center for Community Engagement, gave a summary of the Community Housing Hub. She stated that one of the purposes of the Housing Hub was to promote housing equity and social justice, which is the founding principle for community engagement. Virginia then elaborated on the inspiration for the workshop. In 2015, Dr. Eric Tang presented his research at a Front Porch Gathering hosted by the Center for Community Engagement. His research analyzed the declining African American population in Austin, Texas. At the end of this community event, a woman named Bettye Washington presented a letter given to her by a business wanting to take ownership of her home. The letter stated that she needed to “Move Out and Move On”. Virginia then concluded by saying that the Center for Community Engagement’s role is to be a centralized space with three focus-areas of research, advocacy, and preservation. The center hopes to make this workshop accessible to other parts of Austin.

Cara Briggs, a native Austinite and Blackshear Elementary School parent, was the first community storyteller of the day. She is the parent of a 4th grader who is walking in the same footsteps as her grandmother who also went to Blackshear. Cara then asked the audience to raise their hands if they were native Austinites and only 6 people raised their hands. She mentioned that those who were native Austinites have seen how the city has changed. Austin is one of two cities that have a declining African American population and one reason for this is gentrification. She would love to see Austin become a more affordable city to live in.

The next and final community storyteller of the day was Mr. Volma Overton, a community activist who comes from a long-line of Austinites and activists. He talked about how he grew up in the Jim Crow era and how he is a 3rd generation Austinite. He stated that he has seen changes in Austin such as schools closing on the Eastside and how there are more dogs in East Austin than kids. He pointed out the fact that some people are now paying $1,500 a year in property taxes. He mentioned that a lot of families should have been informed of their options of what to do as a result of these changes. He concluded by saying that growing up, UT was on the wrong side of history. He is glad to see UT trying to make a difference today. 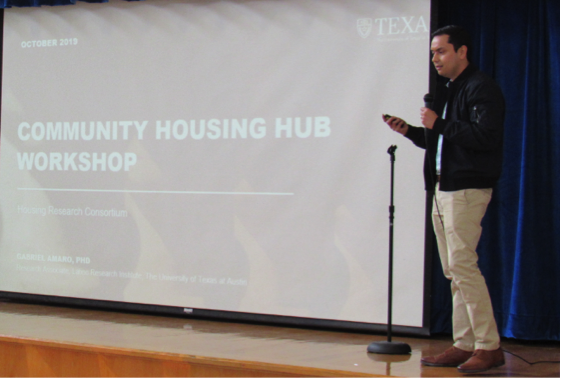 After Mr. Overton finished sharing his story, Dr. Gabriel Amaro, Research Associate for the Latino Research Institute spoke about the history of the unethical housing practices that the city of Austin has participated in for decades. He spoke about the creation of a “Negro District” in 1928 where all services that were provided for Black people were forcibly relocated to East Austin. Dr. Amaro mentioned how there were some discriminatory housing policies that were developed within the 21st century and the ways the city of Austin is trying to eliminate these practices with projects such as the Institutional Racism and Equity Task Force.

Dr. Amaro’s presentation was followed by three sessions that focused on housing and preservation.

1. Historical Designation, presented by Steve Sadowsky from the City of Austin Preservation

How did the LHP process learn from other similar processes around the country?

Austin is trying to be more practical

plan for your personal and health care, and mange or transfer assets in the event

of your incapacity or death

Intestacy (dying without a valid will)

3. Cultural Preservation, presented by Stephanie Lang from the UT Center for Community Engagement

The Power of Storytelling

The last speaker of the day was João Paulo M. Connolly from the Austin Justice Coalition. He began by speaking about the history of the Austin Justice Coalition and how it was created as the number of police-involved shootings increased. The organization is now working on issues of housing and affordability through an initiative called Complete Communities. They want to build a community that does not displace people and asks questions such as: how can we undo Austin’s legacy and segregation? How can we heal as a community? What do we need to do as a city to heal?