Through a partnership with Austin’s Colony Park Neighborhood, students are learning about the less visible legacy of racism, the persistence of community leaders and the power of collaboration 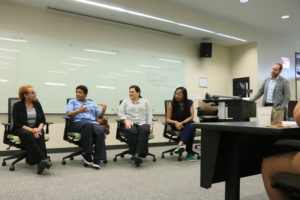 Four community leaders involved with the Colony Park Sustainable Community Initiative came to speak with students in the Moody College of Communication.

AUSTIN, TEXAS– The recent uprising over the killings of George Floyd, Breonna Taylor and Ahmaud Arbery and broad calls for racial justice have brought attention to systemic racism and inequalities for African Americans. Beyond the issues of police brutality and racism in the criminal justice system, the frustration and anger that have fueled the protests can be traced to the unequal impacts of the coronavirus and the longstanding inequities that account for those disparate impacts: inequities in health coverage, health care, quality of life, employment, residential segregation and a host of other things that can often be invisible to others.

One of those areas is access to healthy and affordable foods due to residential segregation and other factors. This is the case for the Colony Park Neighborhood in Northeast Austin, which has been geographically isolated from retail and infrastructure, including large grocery stores. Together with the UT Center for Community Engagement, Moody College of Communication students are learning first-hand from residents and activists about such systemic inequalities and working to empower their voices through video and film.

“Before the pandemic, we got to listen to a panel of community leaders involved with the Colony Park initiative, and we had hoped to follow through and help amplify their stories,” said communication and leadership sophomore Emily Anaya. “We were doing a lot of brainstorming about how to use our communication skills to tell their stories through film, interviews, and more.”

At this panel, students learned about the obstacles residents face in their daily lives as a result of racist policies of the past and neglect in the present. They also heard from community leaders about the dogged persistence needed to get the city to take their demands– including greater access to grocery stores and green space– more seriously.

“I don’t think that there would have been a community on the west side of I-35 that would have been left to its own devices the way that we have been out here,” said Barbara Scott, the president of the Colony Park Neighborhood Association and a member of Moody College’s panel of community leaders who has lived in Colony Park since 1974.

Years of self-advocacy have paid off, however, as Colony Park became a partner with developers and the City of Austin to create a Colony Park Master Plan in 2014.

Funded by a $3 million grant the City of Austin won in 2012 from the Depart­ment of Housing and Urban Develop­ment’s Sustainable Communities program, the initiative is an opportunity to develop the 208 acres of property in Northeast Austin and to revive the neighborhoods nearby, where residents have historically struggled with crime and a lack of available transportation, retail, and entertainment options.

“During this process with the city, we came up with eight pillars of need that we gave to them,” said Scott.  “One of them was access to parks… and it’s taken years but we now have a park. We had a grand opening on March 7, and it’s a beautiful park.”

Carol Fraser is a food systems programs coordinator for the City of Austin who works with the Colony Park Neighborhood.

“[Colony Park] is essentially an area of the city that is under-resourced and under-invested both by the private sector and the city, but has a lot of potential and has a lot of community organizing involvement,” Fraser said. “You know, people who live there really care about their community and are really engaged to make it better for the long haul.” 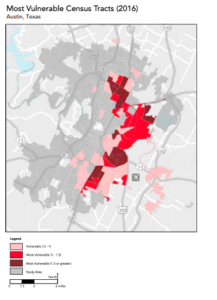 Photo Courtesy of the University of Texas at Austin

This 2016 map illustrates the “eastern crescent”, a geographic pattern of social disadvantage in Austin, Texas. Residents in these census tracts are most vulnerable to gentrification and displacement, and struggle with access to adequate resources.

Decades of housing discrimination due to the City of Austin’s 1928 segregationist city plan pushed the city´s Black population east of what is now Interstate 35. Gentrification in more recent years has pushed many Black residents further east. Income inequality, and lack of access to infrastructure and resources continue to be a reality for many neighborhoods in what is sometimes referred to as the eastern crescent.

This is the case for the northeastern Colony Park neighborhood. But because it is also geographically isolated, residents have also been cut off from important resources like large grocery stores and medical facilities.

“The eastern crescent runs from southeast Austin to northeast Austin, and all of these areas have a history of being neglected by the city,” said Laura Cortez, whose consulting firm works alongside the city for the Colony Park initiative. “These are high-minority population areas with a high number of African-Americans and undocumented Latino families. Colony Park is unique in itself because all of the other areas of Austin that have been gentrified have come with resources, whereas Colony Park has not.” 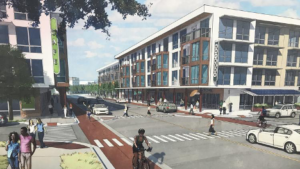 The Colony Park Master Plan, as rendered in this image, calls for more than 3,000 homes and up to 960,000 square feet of commercial space.

Annexed in 1972, Colony Park was built to accommodate families stationed at Bergstrom Air Force Base (1942–1993), a United States Air Force base that was located seven miles southeast of downtown Austin, Texas. Other families moved to the Colony Park community to start families and enjoy the quiet landscape and new affordable homes. 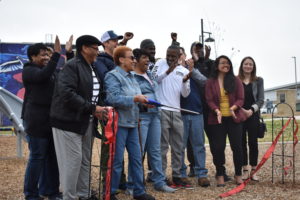 Barbara Scott and other community members gather at a ribbon-cutting ceremony to celebrate the grand opening of Colony Park District Park.

Though the pandemic halted their efforts, Moody students will continue supporting the Colony Park community through collaborations and engagement work, and by strategizing ways to help amplify resident voices through the power of communication.

“I really hope Moody keeps working with Colony Park, and that other UT organizations take up the cause as well,” said advertising sophomore Hanna Tinsio. “We hold privilege as university students, and we owe it to our community to use our platforms to amplify their voices and help them meet their priorities.”

Commitment is important to UT’s Center for Community Engagement as well, which has continued to stay involved with Colony Park since a service-learning collaborative with Austin Community College in 2015.

“We went in hoping that we could elevate the voices of the community and build capacity for the work that they valued and wanted,” said Suchitra Gururaj, Assistant Vice President for Community Engagement and Economic Development at UT Austin. “I’m very proud that our Center for Community Engagement continues to work with the Colony Park neighborhood association. After all, it’s not enough for UT to start a project, parachute in, and then leave. It’s critical for real community building that our partnerships be sustained.”

Together, along with the community, the City and Catellus Development Corporation are now working towards the next phase of implementation for the initiative, which involves adopting the master plan and setting the stage for development. They will build on the work that has already been established by residents and utilize the community’s eight pillars of needs to focus their work. The City and Catellus now have a two-year time frame to negotiate the Master Development Agreement.

“There’s so much to be said about Colony Park,” Fraser said. “In some ways, the story of the neighborhood has been told many times, but it doesn’t always get heard. The City has a lot of power to change and shape the area, but as an institution it also needs to recognize where it has failed in the past, and the ongoing consequences of those decisions. I think we need to be aware of that in the work that we do.”