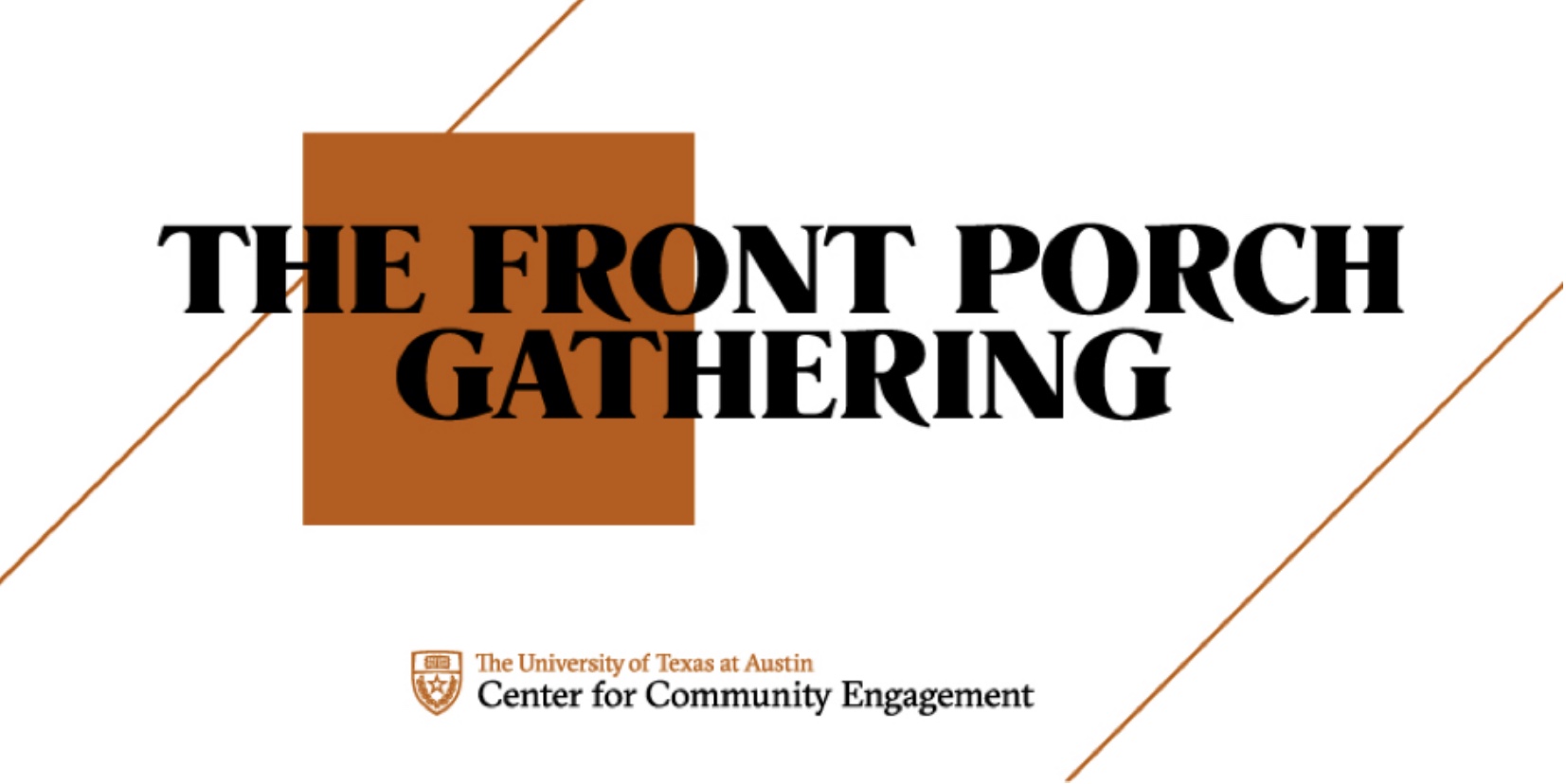 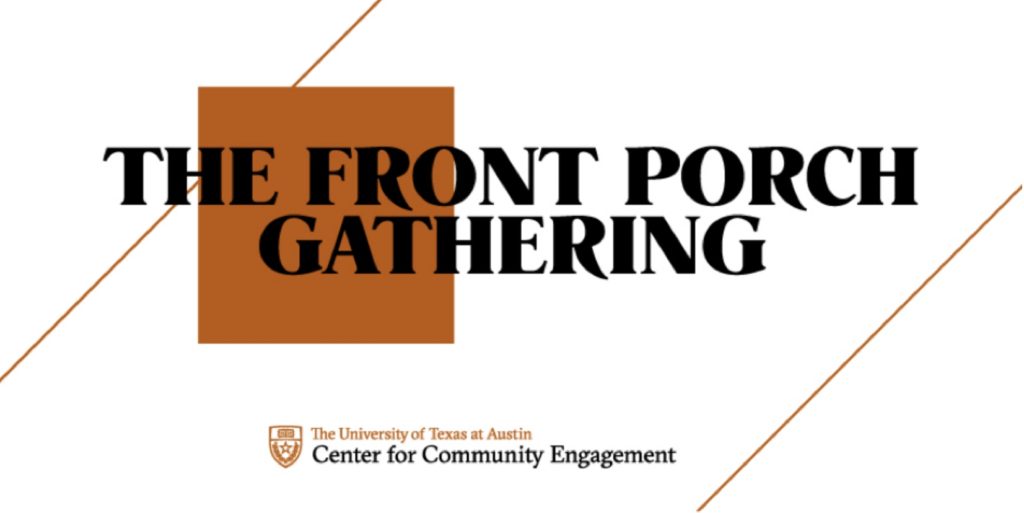 A Movement not a Moment: Reflections, Outcomes, and Strategies for Sustained Civic Engagement
Recap | October 2020

On the night of October 20th, the Center for Community Engagement (CCE) held its Front Porch Gathering for the fall of 2020. The event was focused on driving discussion for developing effective strategies for civic engagement in historically marginalized communities. This year has taught us that it is now important more than ever to highlight the critical issues most relevant to our communities and to amplify the voices that have long been ignored. Community members, organizers, local civic organizations, and the Institute of Urban Policy, Research, and Analysis at the University of Texas at Austin were invited to share their stories and knowledge with each other on ways to create a sustained movement for civic engagement in our communities.

The night began with welcome remarks from Dr. Suchitra Gururaj, the Assistant Vice President for Community Engagement and Economic Development at UT Austin, who started us off by highlighting the silver linings that have come with such a challenging year. As the state of our society is seemingly thrust into turmoil, we have found that this has also brought people together and made our communities stronger. This year has started meaningful conversations about civic engagement as we become more assertive with what we want our communities to look like and our demands for a more equitable society. However, it goes without saying that a new set of challenges also arose from these times, but organizers and civic organizations have now learned a key lesson in adaptability that will remain valuable to political movements far into the future. Dr. Gururaj offered an example of the many census groups whose mobilizing efforts were derailed from the sudden onset of the pandemic but were able to pivot their outreach efforts following the shift to digital means. The census is especially important to build more equitable communities, and the lessons learned from their flexibility in such unpredictable times will be beneficial to all civic engagement efforts.

Dr. Gururaj then gave the floor to Stephanie Lang, the new Director of Equity and Community Advocacy at CCE, who gave us some opening remarks. Stephanie is taking her background as a cultural preservationist and community curator into her new role as she stresses the importance of telling our stories to inform the movements that we build. Centering the community will always be a priority for her work, and that was also her rationale for choosing the night’s community storytellers: Gavino Fernandez, Jr. and Priscilla Hale, two major leaders within the Austin community. She invited them to speak of the history of engagement within their communities as we learned from their lens on such a crucial topic.

Gavino Fernandez, Jr. was the first storyteller of the night. An Austin native who has been involved with his community for as long as he remembers, Mr. Fernandez describes the shifts seen in his community especially as a LULAC volunteer in trying to increase civic engagement during the pandemic. The pandemic has caused a multitude of civic engagement outreach efforts to pivot towards social media, but Mr. Fernandez stresses how important it is to be cognizant of how this affects marginalized communities. The digital divide is especially prominent in a time like this, and efforts to accommodate communities are needed now more than ever to sustain civic engagement. Mr. Fernandez brought up an example of the LULAC office on 6th being available for people to borrow computers so they can take the census. In order to build more equitable communities, the digital divide and the inherent class disparities that lead to it need to be accounted for and centered in outreach strategies.

Our second storyteller was Priscilla Hale, a community organizer and the Executive Director of allgo. Like Mr. Fernandez, Priscilla is also a native Austinite and was raised in East Austin. She shared with us how civic engagement looks different for historically marginalized communities based off of her experiences growing up as a proud East Austin resident. It is important to be mindful of the language being used with outreach efforts in these communities as they have always been attuned to the political system without labeling this involvement as “civic engagement.” Discounting what civic engagement looks like in different communities only leads to further exclusion. Priscilla shared powerful anecdotes seeing East Austin civil rights activist Dorothy Turner stir up the community with her vocal methods or discussing the 1980 election as a child in elementary school. These stories highlight how the community is having these civic conversations in ways that look different than expected. Priscilla ended her time by emphasizing the importance of protest and mobilization, but also the work it takes to support these movements from community organizers and organizations.

After the storytelling portion of the event ended, the folks at the Institute for Urban Policy Research & Analysis (IUPRA) presented some insights gathered from their research brief about the census. They emphasized the importance of researching perspectives, particularly of those not in the room but still feel the impact, while working on policy and civic engagement-related matters. This is especially important in regards to the census, where underrepresented groups are quite literally made to be invisible when undercounted. Their research has identified six groups that are at risk for being undercounted in the census:

These groups are underrepresented in the census due to a multitude of socioeconomic issues including language barriers, class disparities, and irregular housing situations. However, the consequential impact of this lack of representation is immense as the census plays a major role in important policy decisions. IUPRA has outlined four key areas where census data is integral:

The census affects major aspects of our society, so the outreach work of the Complete Count Committees is especially important now in order to ensure that underrepresented communities are accounted for in this year’s census. Despite the shutdowns that have resulted due to the pandemic, the Complete Count Committees have adapted with digital ads, powerful positive messaging, and culturally targeted communications. They have found that targeted messaging to speak to each community’s specific obstacles about the census were the most impactful in ensuring engagement.

Relatedly, Raven Douglas from MOVE Texas was our second speaker. As the political director of a grassroots civic organization, Raven is working to build power in 9 different counties in Texas by mobilizing and empowering people to vote. She then shared with us a brief overview of the work done by MOVE Texas as well as tangible ways and best practices to combat voter suppression learned from her experiences doing this work. MOVE, which stands for Mobilize Organize Vote Empower, is a youth-led organization that engages the community with people from those communities.

A big component of their work is civic education, which they do through a leadership development program and a massive voter registration by mail campaign. They were able to register over 50,000 young people to vote this year. However, Raven notes that Texas is one of the hardest states to vote in. She shined a light on a multimillion dollar scheme to intimidate and spread misinformation to prevent marginalized groups from exercising their right to vote. This is most evident by the Governor, Attorney General, and Republican Party rolling back accessibility to voting in the midst of the pandemic; the most egregious example being limiting counties to have a single ballot drop-off location. At a time where folks are mad and looking to make a change, resistance to these acts is crucial. MOVE has responded to acts of voter suppression by proactively reporting and tagging false information and sending out positive messages instead. Raven ended her presentation by providing some resources to stay informed about the upcoming election including Texas Civil Rights Project, League of Women Voters, and Ballotpedia.

After our presentations, we moved into small group discussions with discussion questions provided by Jeremy Horne, a graduate assistant for CCE. These groups were also facilitated by members of IUPRA. Some key takeaways from this discussion were:

The night closed with remarks from Stephanie Lang as she stressed the importance of thinking critically about citizenship and the privileges it encompasses. We must think about which communities citizenship has been historically afforded to and who has been disenfranchised, in order to build more inclusive movements. However, meaningful change is possible and has been occurring from the work that communities have put forth for decades.

To review the comprehensive notes from each group’s discussion please click here.

Your link to direct service in the Austin community. Sign up for service and track your volunteer hours, or bring a group to one of our planned days of service.