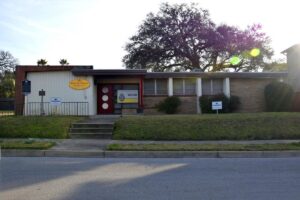 For almost 70 years, the building at 1191 Navasota Street has been a microcosm of Austin’s eastside, a witness to both the historic civil rights victories and the daily life of East Austin’s inhabitants. The asymmetrical, one-story building was constructed in 1952, when the Colored Teachers State Association of Texas commissioned John S. Chase to design their headquarters. The group was founded in 1884 to promote equality in the public school system under Jim Crow and to unite African American educators. The group fought to attain better educational opportunities and working conditions for Black students and teachers. One of their main goals was to establish a state-supported Black university, and they assisted Heman Sweatt with his lawsuit in 1946 when he was denied admission to the University of Texas at Austin on the basis of his race. Before their permanent headquarters was built, the association convened at the residences of the secretaries. For 14 years, 1191 Navasota Street was where the Colored Teachers State Association of Texas, which was renamed the Teachers State Association of Texas, conducted its business and strove for racial equality in the state’s education system.

In December 1966, the group dissolved, and the building was sold to Ella Mae Pease. Under her ownership, the building became the House of Elegance, a beauty salon that opened in 1968. According to some, the salon was the first in East Austin to offer hair weaving, and many women who had formerly been members of the Teachers State Association of Texas frequented the salon for hair appointments.

Pease’s daughter, Pearl Cox, says that the salon is “Miss Pease’s legacy. There’s not a person in Austin that she hasn’t touched.” Cox was raised in the House of Elegance, and in between eating and sleeping in her mother’s salon, she picked up beauty secrets, and she saw firsthand how the salon could both beautify and uplift the members of her community. Pease passed the building on to her daughter, and the House of Elegance operated not only as a salon in East Austin but also as a social hub for many decades.

In 2018, The University of Texas at Austin purchased the building and contracted Carter Design Associates, the firm of Donna Carter, the first licensed Black female architect in Austin, for renovations. In this space, conceived by John S. Chase and given new life by so many important Austin figures, the university’s Center for Community Engagement will work to foster connections and meet community needs. The CCE will extend valuable university resources to the community through free and low-cost programs housed at the newly named John S. and Drucie Chase building, including student-led neighborhood beautification projects, grant-seeking assistance, and affordable housing advocacy training. Above all, the CCE seeks to utilize the space in a meaningful way, honoring and furthering the legacy of the Chases.