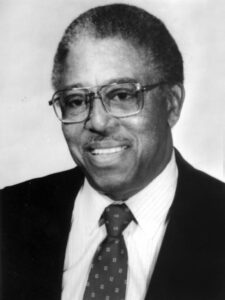 As a young boy born on January 23, 1925 in Annapolis, Maryland, John Saunders Chase drew airplanes and buildings. He didn’t know exactly what he wanted to be, but he loved to create and design. In elementary school, Chase found the word he was looking for: “architect.” He would indeed become an architect, but little did he know that the pursuit of his passion would have an immense impact on higher education and architecture across the South and beyond.

Chase enrolled at Hampton University, and after his graduation in 1948, he worked in Philadelphia, where he realized how few African American architects there were. Undeterred, Chase made his way to Austin the next year to work with the Black-owned Lott Lumber Company. However, Chase desired further education to continue his professional architectural training. The University of Texas at Austin, conveniently located nearby, was the best place to do so, but at that time, UT was known not only for its distinguished architecture program but also for its segregation policies.

A few years prior, in 1946, Heman Sweatt had applied to UT’s School of Law but was automatically denied on the basis of race. Recognizing that the same outcome would likely result if he applied, Chase went to the dean of the School of Architecture, Hugh McMath, and proposed a correspondence course instead. However, McMath encouraged Chase to wait and apply. Sweatt had sued UT Austin and its then-president, challenging the “separate but equal” clause, and right as Chase and McMath were having their conversation, the Sweatt v. Painter case was brought before the U.S. Supreme Court. Weeks later, as McMath predicted, the court ruled in favor of desegregating graduate and professional schools. Both Sweatt and Chase were now eligible for admission to UT.

On June 7, 1950, Chase made his way to Gregory Gym to enroll at The University of Texas at Austin. He was one of the first African Americans to attend graduate school in the South. During his time as a Longhorn, Chase received hate mail and was shadowed by federal marshals. He was the only Black student in classes, and he was barred from social activities on campus and businesses on Guadalupe Street. Nevertheless, Chase persevered through his studies. Upon completing his thesis, titled “Progressive Architecture for the Negro Baptist Church,” he became the first African American to graduate from the School of Architecture in 1952.

Chase was offered a job as an assistant professor at Texas Southern University and moved to Houston after graduation with his family, but architectural firms refused to hire a Black architect. Thus, he took matters into his own hands—he decided to “hire himself.” Chase took the state examination, becoming the first Black licensed architect in Texas, and he founded his own firm. Not only did he find a way to support himself, he strove to extend that support to others, hiring minority engineers, architects, and draftsmen. With the help of his wife, Drucie, his firm expanded to approximately fifty employees in four different cities, but the Chases never moved away from his predominantly Black neighborhood in Houston.

Even though he lived in Houston, Chase’s ties to Austin remained strong. Early in his career, he applied the ideas in his master’s thesis by working on Black churches such as the David Chapel Missionary Baptist Church in East Austin. In 1952, Chase was commissioned to design a building for the Colored Teachers State Association of Texas, a group that achieved multiple civil rights victories for African American teachers and students. Chase’s residential commissions in Austin included the Phillips House and the Thompson House, which was built for the widow of Oscar L. Thompson, the first African American man to earn a degree from UT.

As his career progressed, Chase received larger commissions. He contributed to the Texas Southern University campus, the George R. Brown Convention Center, and the Astrodome renovation in Houston. He was also asked to design the United States Embassy in Tunisia. Chase was the first Black president of the Texas Exes, the first Black man to serve on the U.S. Commission of Fine Arts, and a co-founder of the National Organization for Minority Architects.

Throughout his long, prolific career, Chase’s work was human- and community-centered. Inspired by Frank Lloyd Wright, Chase sought to create bright, clean spaces for social gatherings. According to Dr. Tara Dudley, Chase was set apart by his “very personal approach to mid-century modern architecture,” and he was influential in bringing mid-century modernism to the African American communities where he lived and worked. He made both a tangible and intangible imprint on the Southern landscape. When he passed away on March 29, 2012 at the age of 87, Chase left behind a legacy that he built himself, made up of countless “firsts” and incredible courage. The University of Texas seeks to honor John S. and Drucie Chase’s vision by carrying out its community engagement work in one of Chase’s first projects: the former headquarters of the Colored Teachers State Association of Texas, newly renamed as the John S. and Drucie Chase Building and restored by Donna Carter, the first licensed Black female architect in Austin.

A Legacy of Firsts: Texas Architect John S. Chase, Humanities Texas & the Division of Diversity and Community Engagement at The University of Texas at Austin (https://www.humanitiestexas.org/news/articles/legacy-firsts-texas-architect-john-s-chase)

As We Saw It: The Story of Integration at The University of Texas at Austin, edited by Gregory J. Vincent, Virginia A. Cumberbatch, and Leslie A. Blair (https://utpress.utexas.edu/books/cumberbatch-vincent-blair-as-we-saw-it)