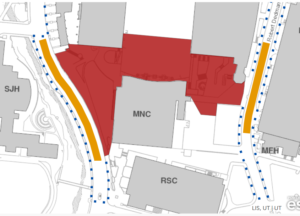 A Texas Athletics project to expand the South End Zone (SEZ) of the Stadium, including portions of the East and West Grandstands, has begun this month. Construction fencing will be installed near the end of April or early May. This project is scheduled for completion in late summer 2021. The campus community can expect increased equipment and truck traffic in the area as well as alternative pedestrian routes and vehicular detours.

Visit the Construction Advisory for this project for pedestrian pathways and vehicle routes, and please be aware of signage and flaggers providing direction near the construction site.

From April 22-May 3rd there will be no accessible route from Speedway to SZB. Folks needing to use an accessible pathway to get to SZB will need to approach the building from MLK Jr. Street, University Ave or 21st St. 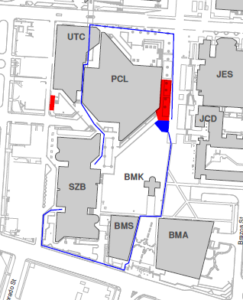 The Welch Hall construction project will be working on the elevators in Welch on Friday April 12th  and Saturday April 13th.  During these days, power to elevators in Welch will be turned off and folks will not have access to the 4th or 5th floor via elevator. The 3rd floor will still be accessible from Inner Campus Drive and the 2nd floor can be accessed from Speedway.

Please reach out to the University ADA Coordinators if you have a class on the 4th or 5th floor of Welch on Friday the 12th and will be impacted by the elevator outage on these dates. The ADA Coordinators can be reached via email at ada@austin.utexas.edu

A project to renovate the south wing and portions of the west connector wing of Anna Hiss Gym (AHG) begins FEbruary 6th and is scheduled to be completed in January 2020. During the project, pedestrian and cart access to the Molecular Biology Building (MBB) from the southeast corner of AHG will be blocked by construction fencing. To see the construction zone and travel paths for this project, visit the campus Construction Advisory.

Work to remove the W.R. Woolrich Labs building (WRW) and construct the new Energy Engineering Building (EEB) for the Cockrell School of Engineering begins December 2018 and will continue through summer 2021. Existing travel paths will be adjusted to navigate around the construction site. Signage will be installed at key locations around the site to assist with wayfinding. Construction will generally occur Monday through Friday, 6 a.m. to 6 p.m., although adjustments may be made to maintain the project schedule. To see the construction zone and travel paths for this project, visit the campus Construction Advisory.

In preparation for construction of the Energy Engineering Building (EEB), Utilities and Energy Management will begin installing a new gas line to connect our campus loop to the new Texas Gas Service meter at the Hal C. Weaver Power Plant Annex (PPA) on E. 24th Street between San Jacinto and Speedway Mall. This part of the EEB construction project will begin Monday, February 4, and last approximately six weeks.

Gas service in the surrounding buildings will not be affected, although there may be some outdoor gas odor during the construction. Pedestrian and vehicular traffic will be affected by the following:

Pedestrians should be mindful of staying clear of the established work zones and follow signage directing them around the utility activity.

Please note that the EEB construction project will continue to have an impact on pedestrian and vehicular traffic as construction continues and intensifies. The building is expected to be completed in 2021.

Go to the calendar page for upcoming event details.