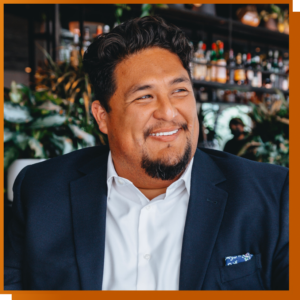 Executive Director of The Office of Inclusive Innovation and Entrepreneurship

The story of humanity is an epic evolution and expansion of love in action, ever-present and amplifying each moment a soul chooses to walk by faith and trust in the fact they are held in well-being and creates that with their fellow man. Life for Rubén Cantú, starts with his family immigrating from Mexico and its indigenous roots. It includes traces of European, African, and Asian descent. He is a manifestation of what it means to be fully American, with the different racial and ethnic strands of what makes this country unique. Through this lens he walks through the world with a mission to foster peace through understanding and healing through love. His work through the past twenty years has had him play a role of a bridge through the power of convening community and storytelling. From launching his first radio show at fourteen, to founding his first company at sixteen, to working with some of the world’s biggest hip hop stars, his early career in music set the tone of what would come next.

As a first-generation college student from migrant workers, his dream was to create a better world for his family, Cantú did not just accomplish this, but he went on to see a precedent for his family, high school, and native east side community. As the first student from his school to go to UT Austin for his undergraduate studies to going to graduate school and learning he was one of the very first Mexican American students to go through the program, pioneering was his and honor it was also a responsibility.

Launching his second company in 2009, CORE Media Enterprises launched as a full-scale video production company with a mission to create content that shifted the minds and consciousness of people to be more intentional, responsible, and loving towards each other and the environment. This later evolved into a marketing strategy agency and eventually that led Cantú to serve as a fractional marketing officer for startups and consult on how they can be sustainable and profitable through the application of investments of people development, protecting the planet, and prudential profits.

During this past decade, Cantú became deeply passionate about social entrepreneurship, in 2012 he launched a local community around this conversation which eventually led him to help found a global community with the United Nations Foundation in 2013. +Social Good brought local activists who leverage technology around the world. They create grassroots initiatives that deliver results so they can have a voice on a global stage. Their actions help shape the conversation and development around the advancement of the Sustainable Development Goals and holding world leaders accountable. Cantú pioneered the first-ever conference for social innovation at SXSW in 2013. And he launched Austin’s first social impact accelerator and fund and pitch competition.

In 2015 he co-created a version for Title 1 public schools bringing entrepreneurship back to the block with a program called, Startup Superstars. In 2016, he co-founded a version for college students. Aptly branded the LevelUp Institute, it went out to launch the careers of very talented students who now launched ventures, non-profits, and work for Fortune 50 companies. In the summer of 2018, he was recruited by the University of Texas at Austin, to launch this program inside the university, and founded the Office of Inclusive Innovation and Entrepreneurship where he serves as Executive Director and Assistant Professor. He’s launched the Product Prodigy Institute and WIELD Texas, two student-facing programs that teach entrepreneurship, executive leadership, and human-centered design.

As a consultant and coach in DEI, social impact, community building, and practitioner of human potential/emotional mastery, Cantú travels the world giving talks, workshops, and launching movements that advance more love in the world.

He co-founded a think and action tank in 2020, at the start of the pandemic, Community Resilience Trust. Today, CRT has played a pivotal role in operationalizing equity throughout our city and creating a model of innovation from the margins.

When not working, he focuses on being a bridge between the local community and international issues that break barriers and foster peace and prosperity. He also is an avid music lover and Jeopardy enthusiast.