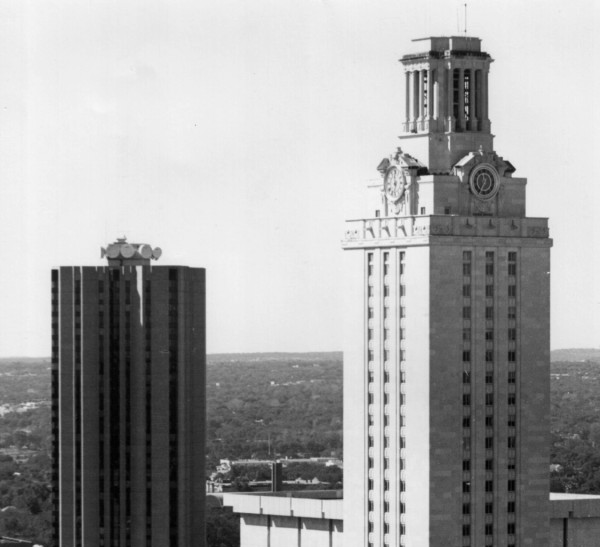 The history of segregation in Austin dating to 1928 is critical to understanding the context of The University of Texas at Austin’s efforts to integrate students of color at the graduate level in the 1950s. Austin’s history of social and cultural isolation provides a window into an era in which African Americans were relocated en masse out of the central city, thus influencing the educational and social landscape of the capitol city. That history also gives context and perspective to the daily struggle of Austin African Americans then and their efforts to overcome barriers purposefully erected to block their access to the best education offered. According to city documents, the 1928 Austin City Plan was aimed at relocating and segregating blacks only. It did not apply to Hispanics, although there was much discrimination aimed at Latinos. The plan to relocate Austin’s black population to an area across East Avenue (which now is Interstate 35) was the City Council’s way to accomplish segregation without defying the Constitution. Historians have deduced that “the first city plan that Austin leaders came up with was designed to be segregated, but they couldn’t legally write that into effect,” wrote Andrew Busch, a visiting assistant professor at Miami University who wrote his dissertation on the history of segregation in Austin.[1] Busch continues his assessment of Austin’s social policy stating, “the city was built to be separate but equal under Jim Crow. Parks were built for African Americans, and parks for whites and Latino schools were placed in very specific parts of the city. In 1930 you’d see African Americans scattered all over the city, but ten years later they were all on the east side. Then, in the early 60s, the city built I-35 right through the divided area.”

The 1928 City Plan not only dictated segregation through physical infrastructure, but predicted discriminatory education practices for the next few decades. The plan outlines that the “negro district and that all facilities and conveniences be provided to the negroes in this district, as an incentive to draw the negro population to this area. This will eliminate the necessity of duplication of white and black schools, white and black parks, and other duplicate facilities for this area.[2]”

By 1932, city records show that nearly the entire black population had been moved to the Negro District. As a result, the Wheatsville School in Central Austin, one of the main schools for black children, was closed. The city plan was just one phase of Austin’s segregation efforts, which included mandating separate streetcar compartments for African Americans, barring Blacks from Barton Springs pool and establishing East Avenue as a physical barrier that divided the city along racial and ethnic lines.

These practices and social sanctions extended itself to the 40 acres. As students of color arrived on campus to pursue graduate studies in 1951, UT administrators were underwhelming unprepared to truly integrate black students, creating isolating experiences for most of the students on and around campus. Although many of the graduate students had already created professional and personal lives that detached them from some of the normal collegiate social essentials, the campus community did little to accommodate, assimilate or welcome incoming graduate students to the Ivory Tower academically and socially.

Newly empowered by the Supreme Court decision in the years following Plessy v. Ferguson, the Texas legislature passed a number of laws that specifically targeted the rights of African American Texans. A poll tax in 1902 forced many Black voters away from the polls, reducing their numbers by the tens of thousands, and in 1906 the Austin city council passed an ordinance that legalized segregation on public transportation systems.[3]  In 1923, the legislature even went so far as to pass a “white primary law” that prohibited Blacks from voting in the Democratic primaries.  Despite the bold efforts of African Americans to resist institutionalized racism in the form of segregationist laws, progress was slow. In the decades to follow, education would become a platform of interest for activists and the black community as a whole to challenge the pervasive systemic and social practices of racial discrimination in Austin and in the South.

After the initial integration of UT by a handful of pioneers like John Chase and Heman Sweatt, admitted African American graduate students looked to external resources to help navigate the choppy waters of academic and social life around campus. Despite the pervasiveness of institutionalized racism throughout the state, Blacks in Austin established a vibrant, thriving community in the Eastern part of the city. A number of independent, Black-owned businesses were established there, as Diverse Arts founder and director Harold McMillan describes in a 1999 interview. “Once you go back to pre-integration black East Austin. . .what you’ve got is a community that had cultural institutions, and commerce, and people with money, and people without money, and crime and people with jobs and people without jobs, but it was a normal, functioning community. One of the things that segregation did for black folks was provide some amount of insulation so that they knew what was going on in the community, and their institutions were granted respect,”[4] said McMillan.

In East Austin lay a close-knit black community, including the only higher education resource available to students of color, Huston Tillotson. In a twist of irony, the school’s roots run deeper than that of The University of Texas. Opening its doors in 1877 as Tillotson Collegiate and Normal Institute, the school began classes on January 17, 1881. In comparison, The University of Texas didn’t formally opened until 1883. It was necessary to create an all-Black institution as the Texas Constitution of 1876 required segregated schools. The historically Black institution in East Austin became Huston-Tillotson after the 1952 merger of two colleges birthed out of the American Missionary Society of Congregational church. The small campus would become a shelter and a haven for Black students at UT, serving to supplement the lack of support and understanding of UT faculty and administration alike during the first few years of UT’s integration era.

Although UT had opened its doors to black students, it was made clear that the extent of Black student life would be restricted to the classroom. Many of the regents and members of the UT community believed that an education in its purest form was the only obligatory service UT owed any of the Black students. The promise of personal development, social integration or campus involvement were not promised nor provided.

During a 2010 convening of the Precursors, many of the first generation of African American students shared memories of their social experience in the early years. Many agreed that their first year or two on campus was merely an attempt to survive.  With the opportunity to attend UT came a sense of responsibility. While a personal journey, many of the students understood that their experience was a wider reflection of the African American narrative in Texas and southern education practices. Heman Sweatt once wrote in an article for the Texas Ranger in support of his law suit again Texas, “It cannot be denied that the implications of this matter are destined to affect the lives of many other Negroes. But I am responsible only to the extent of my application.”[5] The consequence of their success or failure had an immense ripple effect that was surely understood by students and the community. Thus, regardless of circumstance, the struggle to survive the 40 acres became a community effort driven by determined students and reinforced by community investment in what was possible moving forward.

[2] Phillips, Alberta, Austin American-Statesman, Proof Austin’s Past is Right There, 2009.

[3] City of Austin, Five Decades of Social Change: A Timeline.