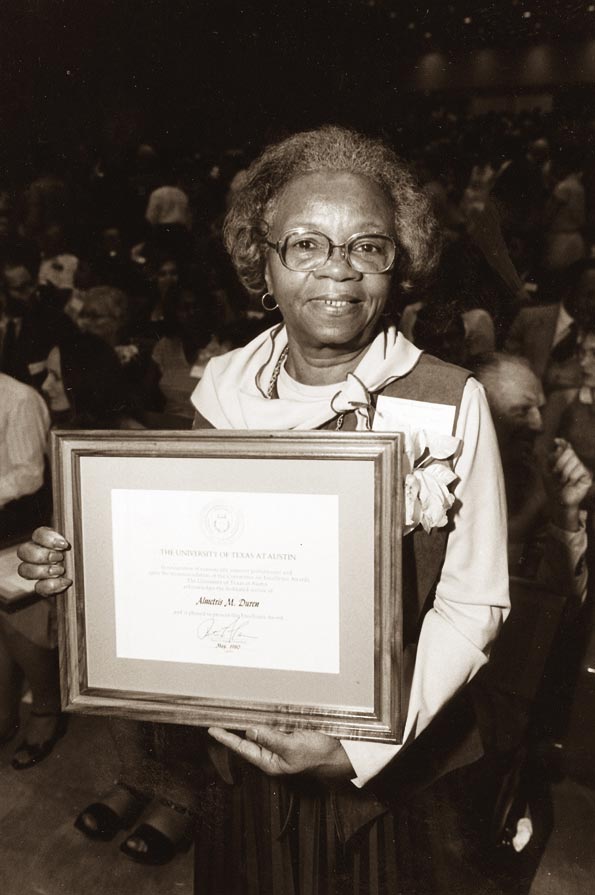 Almetris Marsh Duren was teaching home economics at Huston-Tillotson College when she got a call from The University of Texas.  Would she accept a position as housemother at the dormitory that was being opened for black women attending the university? The year was 1956, the first year that UT admitted black undergraduates, and the only dormitory available was Eliza Dee Hall, owned by Huston-Tillotson and located many blocks from the UT campus.  Duren, sensing the significance of this turn in history, answered the call.

The UT administration had decided to appease the demands of both trustees and concerned parents, by not conflating the pursuit of education with the social interactions of African American and white students. This meant finding housing accommodations beyond the 40 acres. A house in East Austin was made available for a limited amount of female students in the fall of 1954. The distance required to travel from the Eliza Dee Hall to campus only predicted and intensified the isolating experience of many of UT’s first black students. Making one’s way to campus meant hopping on an early bus and walking a few miles to make it to class on time. Likewise, many of the first black students were forced to find alternatives for essentials, including clothing, food and services, such as barbershops and beauty parlors.

Mama Duren, as she was soon called by almost everyone who met her, recognized immediately that her girls were physically isolated from the college experience, but more significantly, UT’s dismal accommodations could psychologically damage the students and their academic potential. To help overcome their isolation, she welcomed all students, men as well as women, giving them a place to gather, hold social functions, and meet with her for counsel and encouragement.  The dorm ultimately became a safe haven for most black students on campus, supplementing each student’s college experience with a sense of security, familiarity and a level of investment in their well-being unmatched by their campus experience. The added pressures of social exclusion, and in some cases academic underachievement to the normal hardships of adolescence proved to be an insurmountable challenge for many of the students. Duren took it upon herself to develop a broad network of resources to meet each of these challenges. Mama Duren fought every day to keep “her” students at UT, surviving and thriving.

Duren’s approach was nurturing and yet defiant as one young man learned when he informed her he was leaving the university and going back home. He explained that he was out of money, had no place to live, and wouldn’t be able to complete the summer session that would enable him to enter UT in good standing in the fall. “No place to live,” she asked?  “What about Joe or Fred?”[1] She quickly got on the phone, calling around until someone offered the student a temporary place to live.  “No money?” Duren quipped, “What about work? Any kind of part-time work will do until you get a fellowship.”  Then, “Have you called your momma yet?  Good, then you don’t have to because you’re not going home, you’re staying right here.  Now go off to class.  You don’t want to get behind in your school work.”  The young man left, as others had before him, a bit overwhelmed but also reassured that he would be able to continue his education.

For students who were struggling with their course work, she’d find other students to tutor them. For the many who were lonely or homesick or uncomfortable on a predominantly white campus, she’d talk to them to convince them that they were smart and that it was important to endure.  “You can go home on weekends,” she’d tell them, “but during the week you have to stay on campus.”

Duren was also a source of encouragement for graduate students.  According to Dr. Exalton Delco, the only black graduate student in Zoology, there was little to no university support for black students pursuing hard science studies like physics, chemistry, or botany. Duren would seek these students out “and would bring them in and talk to them and quiet them down a bit” and give them the support they needed. [2]  “Were it not for Mrs. Duren,” he continued,” I’m telling you, you would not have some of the Ph.D.s we have now in chemistry that I know of personally.”

When Eliza Dee Hall was demolished because it blocked the construction of the new Interstate 35 highway, Duren moved with her girls to a house on Whitis Street, which they immediately named Almetris Dorm.  And 10 years later, when that dormitory was torn down for the new UT Communications Building, she moved across campus to the Dean of Students Office, where she worked as a counselor and advisor for minority students until her retirement more than a decade later.  In her later years Mama Duren lived at Jester Hall on campus, where she continued helping students.  It was there, when a group of Black students were standing around the piano singing one evening, that she conceived the idea of and helped create the Innervision of Blackness Choir. She also started Project Info, UT’s first program established to attract minority students to campus.

For almost 25 years Almetris Duren was the primary housemother-counselor-supporter of virtually all African American students attending The University of Texas.  She had a broad network of resources to dispense and she knew how to galvanize students and get things done in the university community.   If she didn’t know the answers, she knew whom to ask.  She worked quietly and without fanfare; she spoke softly but firmly, and students listened to her.  Wilhelmina Delco, the first African American elected to the Austin School Board, credits Duren with keeping almost every Black student in college during those first years.  “She never raised her voice,” Delco said, “but she’d tell them ‘you’re going to stay here and graduate.’ She networked—she had an incredible network—she talked, and she had a positive effect on everyone.  She kept everybody going.  UT owes her a tremendous debt of gratitude.”[3]

Mama Duren’s work did not go unrewarded.  She received the Margaret C. Berry award for outstanding contributions to student life at The University of Texas, the Presidential Citation for outstanding service, the Distinguished Service Award from the Southwest Association of College and University Housing Officers, and the Nowtony Medal for extraordinary contributions to student life at UT.  As Margaret Berry, dean of women during those years, noted, “Almetris Duren was the continuing link between blacks and whites at The University throughout those difficult years.”[4]  Mama Duren’s ability to mediate UT administration, faculty, community politics and the needs of the African American students was an invaluable contribution the integration process at UT and around the city.

[1] Duren, Almetrius & Louise Iscoe, Overcoming: A History of Black Integration at The University of Texas at Austin, 1979