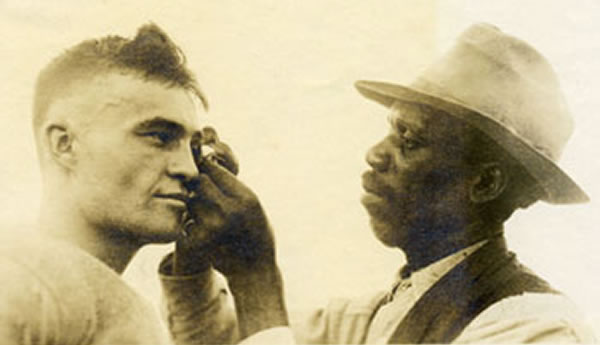 When discussing the story of integration in the United States it is often never started at the beginning. The “firsts,” the pioneers, are traditionally, incorrectly associated with the vanguard of the Civil Rights era, a time period rooted in challenging the system. But for many institutions, education or otherwise, the story, although not as visible or bold, starts long before then. Such is true when curating the conversation of race and athletics at The University of Texas at Austin (UT).

The integration of athletics is a pivotal experience in the context of the broader social narrative of integration at UT and in the South. Sports in the 20th century, as they do now, embody a powerful ability to translate popular culture and narrate transitional periods in history. Football would serve that function in the state of Texas and most visibly at UT.

In the 1880s in Austin, Texas students had begun pressing administration for a gymnasium. Completed in 1889, the north wing of the Old Main Building, the school’s first, included an enormous basement dedicated to storage. Negotiations between students and administration to convert some of this space into a gymnasium however were unacknowledged due to funding. In 1896, though, San Antonio banker George Brackenridge offered a $600 donation. The school immediately began construction, lowering the basement floor enough to create an 11-foot ceiling. Lockers and showers occupied one end of the space; exercise equipment purchased by students and students contributed funds in order to join the newly formed Athletic Association and gain access to the facility.

The social landscape of Austin, Texas in the late 1800s predestined a marginalized experience for African Americans. Concentrated in the freedman community of Clarksville, African Americans had developed a bourgeoning livelihood supported by domestic work in the surrounding white communities and at the small, yet influential University of Texas. At the time the college was committed to and facilitated the grooming of young white men for prosperous professional careers and state leadership. The school was much more interested in establishing a respectable academic reputation, than investing in extracurricular activities, like athletics. Yet the WWI period saw a surge in athletic appreciation from baseball to football and in the fall semester of 1889 the university continued its support of advancing athletics, by hiring an instructor, Homer Curtiss, to teach “physical culture,” which all male freshmen were required to take and a facilities janitor, Henry Reeves.

Born in Tennessee in 1872, Reeves was the third of five children of former slaves Benjamin and Sarah Reeves. Sometime between 1880 and 1897 the family moved to Austin. Benjamin found work as a mail carrier. Unprecedented at the time, Henry has learned to read and write working to his advantage as he entered adulthood and looked to secure work. When Reeves began his employment at UT, the football team was entering its fifth season. His work as a janitor eventually led to his assignment at the gym, in charge of managing the building and keeping it clean. It was there that his interactions with the football team were initiative. That engagement grew over the years, and soon Henry was functioning as water boy, equipment manager and assistant to the coaches. As Reeves built trust with the players, he created his own role on the team, earning him the enduring title of, “doc.” The nickname was just personal as it was functional, as he often helped injured players off the field, bandaging cuts, wrapping sprained ankles, and doctoring injuries.

Reeve’s contributions to the team were widely appreciated by the team and recognized by the UT community. In the campus publication, “The Longhorn” of 1914, the paper referred to him as, “the most famous character connected with football at University of Texas…He likes the game of football, and loves the boys that play it,” they wrote. He took pride in the work he did, the relationships he built and the opportunity he had to participate in a game largely unavailable to African Americans. His steadfast commitment to the team and contributions to grooming the players offered a new picture of African American men to UT administrators and the community at large. The team’s loyalty to Reeves was tested on numerous occasions from weekend trips out of town where he was forbidden from riding in the same train car as the team to an administrator’s attempt to dismissing him as an employee. In both cases, the students defended Reeve’s presence, confirming his value to the program and to the UT community. Reeve’s tenure at the University of Texas spanned almost twenty years of the football team’s early history, leaving an indelible mark on the landscape of athletics at UT. Likewise, Reeves predetermined the integration of athletics, demonstrating a fearlessness of being a pioneer. In the UT yearbook, the Catcus, sometime in the early 1900s, editors published a list of the “all-time teams.” In a poetic fashion one of the teams listed was published as, “Henry’s team.”

Henry Reeves died February 19, 1916. He was buried in Austin’s Bethany Cemetery, the first burial ground in the city reserved exclusively for blacks. His passing received mention in newspapers around the state.