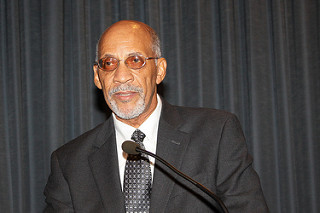 Norcell Haywood: This is Our University

Norcell Haywood and his friends Robert Norwood, John Hargis, and Marion Ford were among the first African Americans admitted to The University of Texas in 1954, but they weren’t allowed to attend until more than a year later.

“There were no other colleges in the state that had aeronautical and chemical engineering, which is why (UT) had to admit us,” Haywood said.  At the time there were only two other options: Texas Southern University and Prairie View A&M University.

He attended Prairie View, along with Hargis, until the Board of Regents admitted or re-admitted more than 100 African American students in 1956. In the era before the civil rights movement, the students faced segregated housing facilities, among other discomforts. “There was no legal structure to support us,” he said.

Haywood went home to eat meals, but his graduate school friends who lived in the African-American only San Jacinto Dormitory D, couldn’t eat anywhere else on campus. Since blacks were only allowed to live in a handful of dorms, many of them had to live off campus. They were united often in their struggle for simple civility.

The collective challenges made it difficult for Haywood and his friends to do well academically. He was also enrolled in 21 class hours, working as a restaurant valet at the Driskill Hotel and part of the ROTC program.

“This was in the 50s, and we didn’t have any civil rights laws,” he said. “Being on this campus was the closest thing to equality that we as blacks had.” Haywood became the second African American to receive a degree in Architecture from The University of Texas at Austin. The first was John Chase, the first African American student to enroll in the school’s architecture program.

Hargis, the first African American to receive an undergraduate degree in chemical engineering, was a good friend of Haywood’s. When Hargis died in 1986, Haywood said his friend asked him not to give up on UT. “We said this is our university and we’re not going to let anyone take that away.”

He established the group Minority Architecture to encourage and mentor young black architects, and talked about the importance of building in the urban community. He was using green architecture “before there was such a concept,” such as using recycled materials, natural lighting and ventilation, and collecting rainwater.

Architecture is a bourgeois industry, he said, and has traditionally been considered something of a luxury and closed to the lower classes. He also tried to use his career as an architect for social change rather than just contributing to the upper-class.

“I would say that we made it because we couldn’t turn back,” Haywood said. “There was nothing to go back to.”

I knew early on that I wanted to be involved in design and by logical extension, equally in building. As a teenager I sketched automobiles as a hobby but I was interested in the appearance and functionality of all things. Before graduating from high school in 1960 I made a decision that to stay in Texas I would forego any thought of automobile or industrial design because that would inevitably involve studying and working out of state. Even though segregation was still a fact of life in Texas and to a great extent at UT, I knew that changes were coming and that as a young black Texan a bright future would still be possible. My decision to study architecture at UT then, was a compromise based on what would keep me in state, what I could afford, and what would allow me to pursue my interest in functional design.

When I entered UT in 1960 I enrolled in Architectural Engineering. Though unclear after the passage of so much time, my thinking must have been that Arch E would involve more of the technical aspects of design. One semester in Arch E and the counsel of a friend in architecture convinced me to change to the School of Architecture. The attempt to make that change was thwarted initially by the lack of a prerequisite which I made up as a non-credit course, and then by a failure to maintain the grades I was advised were necessary to enroll in architecture.

After three years the cumulative toll of life in the early 60’s and academic troubles arising from not yet being in the SOA resulted in my leaving school and enlisting in the army for a three year period. Initially drawn to the physical and mental demands of the military, I briefly considered an army career but a series of scheduling setbacks for an officer career track, and the build-up in Vietnam convinced me to return to school at the end of my enlistment.

Back in Austin in early 1967 I quickly found work in an architect’s office as a draftsman and I returned to school for one ill-fated semester that fall. The combination of being a returning veteran, newly married, and older than most other students proved to be too much of an adjustment for me. Disillusioned with school I decided to work full time and earn my license through equivalent work credits. I continued that plan until 1971 when a reevaluation revealed that the shorter route would be to return to school for a degree. I reenrolled in 1971 and entered the School of Architecture for the first time.

By now most if not all racial barriers had, whether by law or enlightenment, fallen away. Finally in my element and feeling more welcome and relaxed, my academic performance improved greatly. It also helped that my military and veteran experiences were altered by time and events. I completed my degree requirements in the summer session of 1974.

An indelible memory from one of those latter years in school was one exhibit in the SOA building lobby. A student took a photo of an END CONSTRUCTION sign and added a caption to it which read “wishful thinking”. As one who always wanted his to life to be about building, I never understood how that idea was formed in a school of architecture. I still wonder if it was just sophomoric illogic or a paradoxical expression of something deeper from those troubled times.

After a two year apprenticeship, I took and passed the licensing exam in 1976. By then wanting and needing a change I declined a partnership offer from the local firm where I had now worked for nine years and decided to move to Los Angeles. There I worked initially for KDG Architects and Planners headed by Robert Kennard, a pioneering African-American architect in Southern California, and then for Gruen Associates. At Gruen I worked for Norma Sklarek in their production office. She was a pioneer as well, being the first black female licensed architect in the U.S. At that time Cesar Pelli was the head of Gruen’s design group. I worked on several of his projects, including medical facilities in an LA suburb and lease spaces in the Pacific Design Center (“The Blue Whale”).

In 1978, missing Texas and not seeing a long term future in LA I accepted an offer to move to Dallas and open an office with two upperclassmen mentors who graduated from UTSOA in the early 60’s. I headed that office until 1994 when I accepted an offer from UT Southwestern Medical Center to become its’ University Architect. I retired from UTSW in 2008. Almost literally, I consider those last active 30 professional years as coming full circle.

As important as the UTSOA was to my professional life, the entire university experience was more so holistically. The experiences, exposure to ideas, and perspective gained in university during my extended stay gave me base and form. Who I was entering in 1960 was certainly not who left in 1974. The significance of that change is what I appreciate and will always treasure.