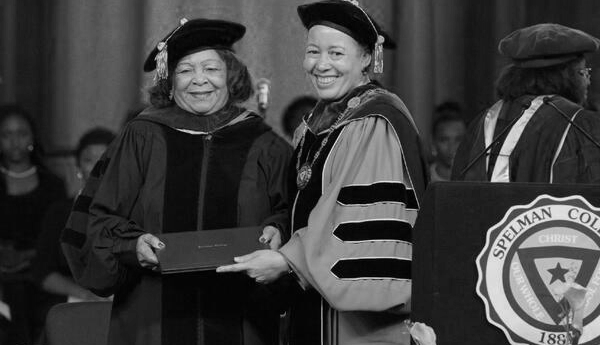 Murphy grew up in Georgia, went to high school in Atlanta and earned her bachelor’s degree at Spelman College. She recalled Atlanta in the 1950s as a thriving civil rights scene, a city humming with influential figures engaged in the struggle for equality. “There were just great leaders there. These were the people that MLK associated with. These were the people that had a great influence on him being an activist even in high school,” she said. “It was not unusual for Martin Luther King to be the leader that he became, growing up in that kind of environment. And it was not unusual for many others that came through Atlanta and became leaders – not only political leaders but just leaders,” Murphy said. “It was a tremendous environment to grow up in. I just think that I’m fortunate to have grown up in that environment, which has always made me very candid and very outspoken, and believe in my opinions.”

Murphy possessed this innate sense of integrity and conviction even in her youth. She laughs as she recounts the story of riding a bus with two friends as a young girl, and how she stubbornly spoke up against the driver when he tried to bully a black man into exiting through the back door of the bus instead of the front. After that, Murphy said, the mother of her friends forbid them from going down town with her any more lest she go stirring up trouble with her outspoken sensibilities.

It was with this same spirited strength of purpose that Murphy arrived at The University of Texas at Austin School of Law in 1966. Murphy had been living in Texas for several years; after working for a stint as a public school teacher in Georgia and then earning her master’s degree from Atlanta University, she had moved to Prairie View, Texas to teach government at Prairie View University. It was there that she met her first husband, a doctor who lived and practiced in Longview and who was visiting to the university’s health clinic. He and Murphy married and Murphy relocated to Longview, where she put her passion to work advocating with some local political leaders in an effort to raise the percentage of African-American voters in her county. Though Murphy had for some time entertained the possibility of attending law school, it wasn’t until after her husband passed away a few years later that she decided to seriously pursue a law degree. She was accepted to The University of Texas at Austin, and rolled into town in her white Cadillac in the summer of ’66.

“Lo and behold I was in for a shock,” Murphy said, explaining that upon her arrival she discovered not only were there no other women in her small summer class, but there was only one other African-American student in the law school – who promptly graduated.

“I really don’t remember facing the serious problems of segregation that I had faced in Atlanta,” Murphy said of her first few years in Austin. She never had any trouble with discriminatory professors in the law school, though she did face unique problems as the single African-American student in the program. “I was not invited to be a part of a study group, and that is so important for preparing for examinations,” she said.

Murphy was also involved in civil rights activism on campus. “I did protest while I was here,” she said. “At that time there were no blacks on the football team and there was an activist on the campus – his name was Larry Jackson – and he had organized students to march every Saturday when there was a home game,” she said. “We would do this marching and I would come back to school on Monday and worry about whether somebody recognized me in the line, protesting,” she recalled with laugh, attributing her determination to continue to vie for equal rights to her upbringing. “Still that background in Atlanta coming forth in my life,” she said, “making me remember that I had a part to play – that I must play – in helping to bring about equality for African-Americans in this country.”

While earning her law degree, Murphy taught at Huston-Tillotson University where she would later become head of the government department. At one point she invited Thurgood Marshall, at the time the solicitor general, to come speak at Huston-Tillotson en route to visit LBJ. His response by letter – which now hangs on her wall – said that his trip would be too short to accommodate a speaking event, but asked if they could arrange to have lunch. Murphy recalled expressing her disbelief over the lack of progress at The University of Texas during her meeting with Marshall. “’You know what Thurgood,’ I said, ‘after 20 years of Sweatt v. Painter, here I am, the only black at the law school.’ And I said that I would have thought that something would have been different.”

Because of her perseverance, Murphy has been a great force towards ensuring that things are different in our society today. In 1973, she became the first African-American woman appointed to a regular judgeship in Texas, and served on the City of Austin Municipal Court for twenty years. Murphy was a charter member of many critical Austin organizations, including the Austin Urban League, the Black Lawyers Association, and the Travis County Women Lawyers Association. For her outstanding contributions Murphy has received more awards than one person could possibly remember, among them the highest award from the Austin NAACP and the first Thurgood Marshall award bestowed by the students at the school of law. She serves on the board for the National Organization of Black Judges, a part of the National Bar Association, and, in 2010, Murphy was inducted into the National Bar Association Hall of Fame.

Murphy remembers how, running into Dr. King once in an airport, King offered her a job with the Southern Christian Leadership Conference. It was right after she had entered law school, Murphy recalled, and her mind was made up that law school was where she wanted to be. “But now I think I would have been more popular if I had been one of his assistants or something,” she said with a laugh.

Murphy said her life has always been animated by a deep commitment to work towards equality for African-Americans, but she became a judge to help all people.