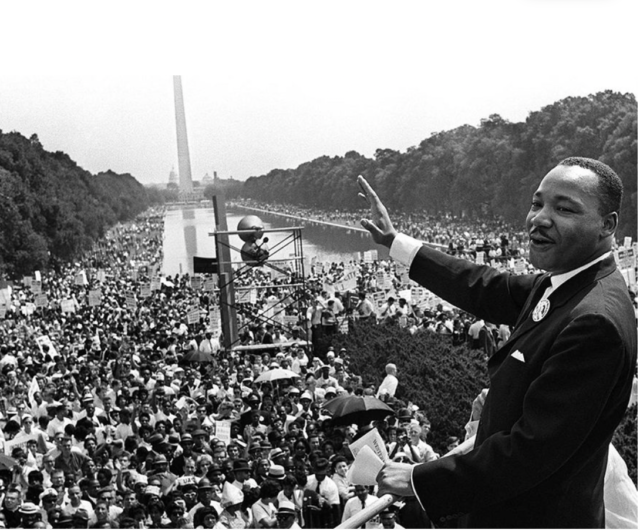 History is punctuated by transformative events with potential to radically restructure its trajectory, from the assassination of Martin Luther King Jr. in 1968 to the Kent State Massacre of 1970. The meaningthat these events come to embody—that is, how these events are signified, how the story unfolds within the national imagery, how one or many narratives emerge—filters through a medium that fundamentally influences how that message is understood and distributed. Mediums take a wide range of forms: print newspaper, television, books, movies, etc. This paper focuses on how a single event in 1968, MLK’s assassination, influenced the way three newspapers operating in The University of Texas competed amongst each other to dictate what the event meant for students and society writ large.

Although difficult to establish a linear cause-effect relationship between the occurrence of an event and the material change that follows, it nonetheless remains important to understand that the strategic way in which an event is framed can generate a national story capable of galvanizing social movements, shifting the dominant discourses, and rescripting the contours of what society qualifies as politically possible. Through the dispersion and digestion of media, society imposes upon its subjects a revaluation of the possible: reprogramming consciousness, subverting traditional paradigms, and expanding novel ideations. Print newspapers epitomized an especially powerful motor of social consciousness and provoker of dialogue during this time since the absence of the internet restricted the scope and scale of digestible media. By printing news and in the process creating a story, language actively dictates, shapes, and infuses meaning within human experiences, inevitably influencing the way people “think about particular objects, events, and situations” (Wenden 2003). As such, even though an undisputable, material reality transpires, language gives coherence to its occurrence by inventing the analytical frame through which one experiences the reality.

Investigative efforts are made here to understand how different newspapers covered a flashpoint event during this time and how their coverage was both uniqueand intertwinedwith certain power structures they were beholden to and world-views they were advocating for. I focus on one historical event with significant resonance: the assassination of Martin Luther King on April 4th, 1968. Coined by literary critic Northrop Frye, “resonance” is the principle by which “a particular statement in a particular context acquires a universal significance” (Postman 1985). This principle extends beyond words and sentences; fictitious characters (e.g. Shakespeare’s Romeo, the paragon of romantic tragedy; DC Comics’ The Joker, a metaphor for unintelligible chaos), objects (e.g. Pandora’s box, symbolizing the curse of curiosity; an olive branch, the metaphor of harmonious peace), and events and places (e.g. Athens, the foundation of rational intellectualism; the Trojan War, and in it the demise that trust precipitates) all contain resonance whereby the original meaning rescripts itself until a universal meaning arises with the power to transcend its original localities and contexts. All mediums of communication contain this capacity for resonating content far beyond its original form. By “direct[ing] us to organize our minds and integrate our experiences of the world,” these mediums are foundational “in the ways we define and regulate our ideas of truth.” MLK’s death was more than rote carbon molecules mechanically rearranging themselves: it contained, within the scale of its vast resonance, an animative narrative that vibrated nationally, evoking compassion and inciting violence, energizing organization, inspiring movements, confirming beliefs while nullifying others, passing civil rights bills. In the struggle between newspapers to inject their respective meanings within the field of resonance and dictate them, one witnesses the power struggle inherent to the process of generating world views.

It was April 5, 1968. In the aftermath of King’s assassination, representations of oncoming ‘black violence’ proliferated throughout the nation which normalized a general state of white panic and anxiety. On the senate floors, President Lyndon B. Johnson politicized the grotesque murder to galvanize Congress into passing the Civil Rights Act of 1968. On the campuses of UT Austin, an official memorial with carefully chosen speakers was quickly sanctioned by the University to mourn King’s legacy. Did this demonstrate the essential goodness and compassion of UT’s Board of Regents? Why did The Austin Statesman sensationalize King’s death as crossing the Rubicon for unfettered black violence? What were the necessary questions asked (or not asked) following King’s death, and what were the implications of the answers for communities, students, and activists at UT? This paper analyzes the resonance of King’s death at UT and how that resonance packaged itself through print media. The paper focuses on the struggles between The Rag(a leftist, ‘underground’ counterculture newspaper), The Daily Texan(a centrist student newspaper tethered to UT’s bureaucracy), and The Austin Statesman(Austin’s comparatively conservative newspaper. For context, it endorsed George W. Bush for president in 2004). It is important to note these organizations vastly differed not only in the politics of what they published, but also in their resource capacity, publishing power, editorial structure, and internal administration. As such, I will first attempt to tentatively outline the philosophical variances that govern each newspaper. Then I will contrast the competing perspectives that dominate each newspaper by parsing through the published articles.

It might appear at first glance that these entities simply represent the natural multiplicity of neutral perspectives, but upon closer examination of the intensity of the papers it is clear that each believed they were fighting amongst each other for high stakes and significant rewards. These rather blatant differences emerge because newspapers have a stake in how they cover an event and, ultimately, in who wins the battle of world-views. Throughout history there are monumental events and flashpoints of conflict that can lead to the domination of one world-view over another and change the course of society, alter public opinion, define culture, catalyze social progress, shape public policy, and ‘write history.’ However, the stakes involved are not only abstract, immaterial victories in social narration; they are also intimately visceral battles within the communities in which these writers eat, breathe, and live. It is important to note that at the time, many students, activists, and ordinary people were fighting for their right to exist peacefully, to eradicate discrimination in education, housing, employment, to free themselves of fighting in a war they didn’t believe in. The stakes were indeed high: as a result of institutional policies, people were left to die, denied equitable opportunities to succeed in life, and discriminated against in every vector of society at a time the civil rights movement was demanding the national installation of justice and equality. Thus, the consequences of reporting an event through a particular framing are not merely macro-societal but are also very much personal and local.

The first issue of The Rag was released on October 10th, 1966, the front-page article written by former Daily Texan editor Kaye Northcott openly blasting the new editor John Economidy as a conservative bigot beholden to the campus police, a proud misogynist, an enemy of leftist politics, and a pro-Vietnam war hawk (Northcott 1966). In this way The Rag emerged as an organic alternative to The Daily Texan, an institution perceived by leftists as a mere “mouthpiece for the university’s information service.” The nature of its origin differs from the Texanand the Statesman, both of which were born out of institutional capital. In a way unseen in Austin newspapers, The Rag actively embraced a philosophy of non-objectivity, an inversion of the normalized expectation that news should reiterate the truth of things in an unbiased, impartial manner. Readers knew The Rag intentionally distilled its content through “anti-establishment and anti-capitalist” frameworks of reasoning and writers never attempted to disguise this reality but made every attempt to openly explain why they held them. The paper eschewed objectivity as a farcical fantasy, explained seemingly innocuous events through broader contexts of power relations and systematic violence, and in this way built the capacity to become a mouthpiece for the changing cultural dynamics. They disavowed the idea of politics as spectatorship and “not only wrote about the news,” but actively made the news: Writers and editors would “organize a demonstration…be at the demonstration…and come back and write about the demonstration.” Politics was not an abstract ideal but rather a participatory game with consequences for the maturation of culture and the distribution of power (Jones 1970).

Another realm The Rag drastically differed from the two newspapers was in its resource capacity. The paper first hit the streets in October of 1966 as the sixth member of the national Underground Press Syndicate. The UPS was an alliance formed not long ago between Free Pressleftist newspapers which included the Berkeley Barb, the Fifth Estate, and others. The UPS network facilitated the distribution of articles and exposure to readership by “interconnecting the papers and giving them a national focus.” The papers were required by membership to allow other UPS members to reprint content from each other without permission or compensation. Within The Rag offices at the University of Texas, the staff comprised of volunteer writers, editors, researchers, activists, sellers, and many times the same people would volunteer to perform multiple roles. These volunteers were often members of other leftist student organizations, most notably Students for a Democratic Society, which provided The Rag with broader personnel and organizational capacity (Dreyer). This lack of institutional backing wasn’t without its struggles and on many occasions The Ragfound itself at odds with the University’s demands. The University suspended students working at The Rag, attempted to censor the selling of articles on campus by arbitrarily enforcing ‘commercial solicitation’ laws, and sued The Rag in 1970 to prohibit the selling of papers on campus (Vizard 1968). Despite institutional resistance, The Rag amassed a substantial readership and over its lifespan demonstrated its publishing power, becoming the most popular underground press nationally while simultaneously “focusing on local politics, covering Austin city government, labor, neighborhood protests, the environment, the developing gay liberation consciousness.” Its internal makeup was radically subversive of traditional administrative norms that had come to define established newspapers. Due to the circumstances of its conception and its unique position as an underground newspaper to directly emerge out of a counterculture community, The Rag was one of first papers to eschew the hierarchical top-down editorial structure deployed by institutional newspapers like The Texan and coined themselves as a “miracle of functioning anarchy,” an anarchy in that roles were volunteer oriented, editorial work was rotational and open to revision, organization decisions were made through a participatory democracy, and there was no static chain of command or institutional obligation (Dreyer). The Ragsought to design itself as an experimental microcosm of the principles it espoused such as participatory democracy and synthesis of politics and culture.

After King was assassinated on the evening of April 4, 1968, there emerged a regional competition in Austin to fill in the narrative vacuum for what exactly King’s death meant for black civil rights, the oncoming summer, and more broadly the future of America. The clashes between representational differences inherent in the three newspapers exposed the conflicting politics of their world-views.