Like many Neighborhood Longhorn Program (NLP) alumni, Marzavia Crayton ended up at The University of Texas at Austin. But he also ended up with a $20,000 scholarship to attend UT. Crayton is now a senior majoring in Human Relations within the College of Communications and looking forward to graduate school and a career in Human Resources.

Although he doesn’t remember exactly how he became involved with NLP at Kealing Middle School, Crayton remembers thinking about college and paying attention to academics early on because of the program. “When I started high school, everything was more of a review for me,” he said. “It was easier for me to catch on than for students who were learning the material for the first time.”

While in NLP, the workshops were his favorite part of the program. “Not only did you get a chance to learn information early but you got exposed to college more and met peers who felt the same way.”

From NLP, he entered the UT Outreach-Austin program and the Liberal Arts and Science Academy (LASA) at LBJ High School. Now at UT, he volunteers with NLP. He helps out on an as-needed basis when workshops or visits are held on campus. He often participates on panels for the visiting students, telling them about what it is like to attend the university. Crayton says the first question he always gets is “Is it fun to be in college?” He tells them to take care of academics first. “The fun comes along with that once you have your priorities taken care of,” he says. He also notes that although younger students may not always listen to adults, they look up to the UT students.

As he has been volunteering since his freshman year, he sees many of the same NLP students each year. “It has been fun seeing how the kids remember me,” Crayton says. “The most heartfelt moments are when a kid comes up to me and says ‘aren’t you the guy who…..?’ That means a lot. I made an impact on somebody.”

Changing Lives One Kid at a Time 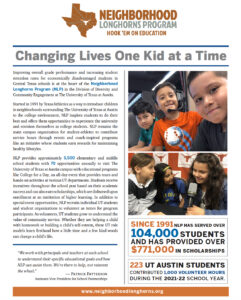 The Neighborhood Longhorns Program is the premier educational outreach program for the University of Texas at Austin offering economically disadvantaged 2nd through 8th graders the opportunity to envision attending college through incentives and scholarships. This is achieved through the involvement of UT students, volunteers and staff that provide tutoring and mentoring in participating Central Texas schools.

NLP In The News