The Texas Education Consortium for Male Students of Color, a new statewide network of school districts, community colleges and public universities, officially launched in summer 2013. Click here for the press release that was released on August 12th, 2013. Here are recent news stories on the Consortium in the Austin…  END_OF_DOCUMENT_TOKEN_TO_BE_REPLACED 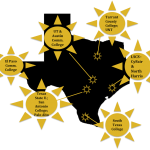 In the last few months, the Greater Texas Foundation (GTF) and TG have awarded Project MALES two new grants totaling over $578,000 to support Hispanic and African American male student success across the state of Texas. These three-year grant awards will support the Texas Education Consortium for Male Student Success, an ambitious…  END_OF_DOCUMENT_TOKEN_TO_BE_REPLACED 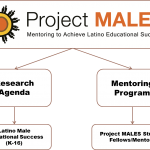 Project MALES (Mentoring to Achieve Latino Educational Success) is based within the Division of Diversity and Community Engagement (DDCE) at the University of Texas at Austin. Our website serves as more than a web presence for the project. It also serves as a clearinghouse for emerging research and news on…  END_OF_DOCUMENT_TOKEN_TO_BE_REPLACED