The Project MALES Fall 2013 Newsletter is now available here.  Featured in this newsletter is an update on our Consortium’s launch, a recap of our third annual UT Latino Male Symposium, and a spotlight on the newest members of the Project MALES team. Enjoy, and please share with others!

Welcome to the official website of the Texas Education Consortium for Male Students of Color. On June 1st, 2013 we officially launched the Consortium, funded by two new grant awards from the Greater Texas Foundation (GTF) and TG as well as continuation funding from the Texas Higher Education Coordinating Board.…  END_OF_DOCUMENT_TOKEN_TO_BE_REPLACED

The Texas Education Consortium for Male Students of Color, a new statewide network of school districts, community colleges and public universities, officially launched in summer 2013. Click here for the press release that was released on August 12th, 2013. Here are recent news stories on the Consortium in the Austin…  END_OF_DOCUMENT_TOKEN_TO_BE_REPLACED 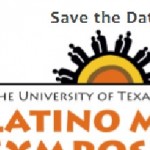 THANK YOU for your interest in the 2013 UT Latino Male Symposium. Our event was held on Friday, June 7th, 2013, at the Student Activity Center Ballroom at UT-Austin. This year we had over 200 attendees who had the opportunity to hear a variety of perspectives from our featured panelists…  END_OF_DOCUMENT_TOKEN_TO_BE_REPLACED

The Project MALES Student Organization was recognized as the January 2013 UT-Austin Student Organization of the Month for its outstanding work in mentoring and community service. More to come soon. Also, the mentoring and research work of Project MALES was recently featured in two news stories: Experts see peril as…  END_OF_DOCUMENT_TOKEN_TO_BE_REPLACED