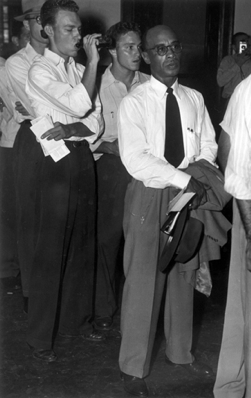 Heman Marion Sweatt applied for admission to The University of Texas Law School in 1946 but was denied admission on the basis of race. Mr. Sweatt, with the help and assistance of the NAACP, brought legal action against the university. In the landmark case, Sweatt v. Painter, The United States Supreme Court ruled that separate law school facilities could not provide a legal education equal to that available at The University of Texas Law School, one of the nation’s ranking law schools.

The Supreme Court ruling established an important precedent for the desegregation of graduate and professional schools. Challenging the “separate but equal” doctrine, the court affirmed Mr. Sweatt’s right to equal educational opportunity and in 1950, he entered the University of Texas School of Law. The Sweatt decision helped pave the way for African-Americans’ admission to formerly segregated colleges and universities across the nation and led to the overturn of segregation by law in all levels of public education in the landmark case of Brown v. Board of Education four years later.