Remembering the Past: Heman Sweatt Symposium 2013

One of the Division’s premier events each year is a symposium honoring the legacy of Heman Sweatt.
Heman Sweatt Symposium on Civil Rights — 2013: Future of Black …Mar 15, 2013 … The Powerbroker – Trailer from The Powerbroker. Synposis: The Powerbroker: Whitney Young&#39;s Fight for Civil Rights …
Heman Sweatt worked as a postal worker, but he wanted to attend law school at the University of Texas.
SWEATT, HEMAN MARION – Texas State Historical AssociationSWEATT, HEMAN MARION (1912–1982). Heman Marion Sweatt, civil-rights plaintiff, was born on December 11, 1912, in Houston, the fourth of…
About Heman SweattMar 15, 2013 … Did you know? Heman Marion Sweatt applied for admission to The University of Texas Law School in 1946, but was denied …
Author Gary Laverge wrote about the importance of Heman Sweatt’s case in the award-winning book, BEFORE BROWN:
Heman Marion Sweatt, Thurgood Marshall, and the Long Road To Justice
Heman Sweatt Biography by Gary M. LavergneU.S. Supreme Court Case Fisher v University of Texas draws attention to Before Brown and the story of Heman Marion Sweatt.
Lavergne and others have written about the legal importance of Sweatt’s case.
State Bar of Texas | Making the CaseHeman Marion Sweatt failed to achieve his goal of becoming a lawyer. But Sweatt&#39;s courage in pursing a lawsuit after he was refused…
In the 2012 NPR story below, Dr. Gregory J. Vincent, a professor of law and Vice President of the Division of Diversity and Community Engagement at the University of Texas said: “In my opinion, Sweatt vs. Painter is one of the most important constitutional law cases in modern times. Without the Sweatt vs. Painter case, you don’t get the critical building block to Brown vs. Board of Education. It is a case that really helped put one of the final nails in the coffin of state-sponsored segregation and to overturn Plessy vs. Ferguson.”
&#39;Sweatt Vs. Painter&#39;: Nearly Forgotten, But Landmark Texas … – NPROct 10, 2012 … The case is Sweatt vs. Painter. Heman Marion Sweatt was an African-American mail carrier from Houston. Theophilus Shic…
You can view clips from previous symposiums below:
UT Integration: Then and Now (Heman Sweatt Symposium)utaustintexas
Sweatt family panel with author Gary Lavergneutaustintexas
Heman Marion Sweatt Travis County Courthousetcarchives
Heman Sweatt Symposiumkvrnews
Stories from first generation African American students at UTutaustintexas
Please join us for our 2013 events, too, on April 24, May 1 and May 3. All of our events are free and open to the public, but you should RSVP for the Evening of Honors on May 3rd. We’ll be honoring the work of Rev. Joseph Parker. You can find more details here: http://diversity.utexas.edu/sweattsymposium/ 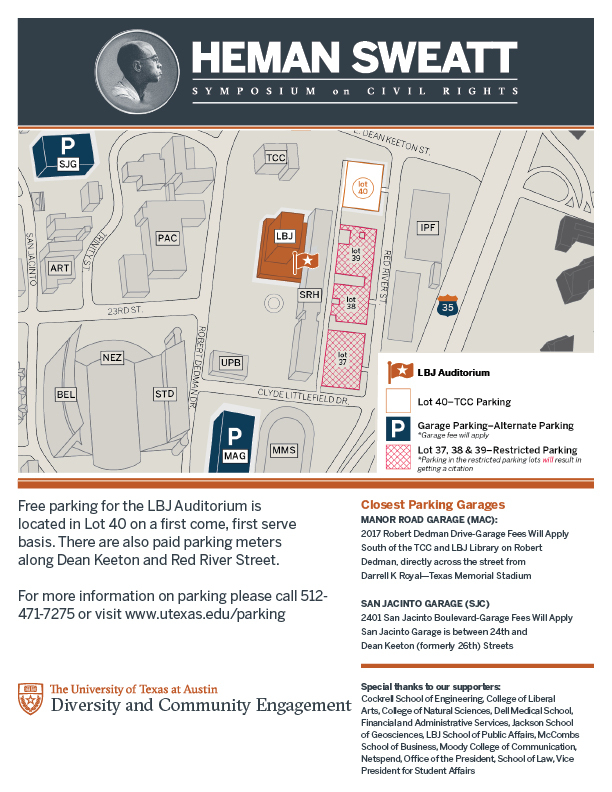 Thank You To Our Sponsors